The U.S. Commission on Wartime Contracting today warned that the $30B to $60B already lost to fraud and waste in Iraq and Afghanistan may be but a drop in the bucket. 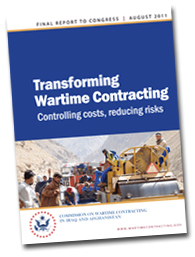 The Commission reports that Afghanistan, which has a $16B gross domestic product this year, will have to spend $30B for sustainment from 2014 to 2017. Thats not going to happen.

The U.S. has committed $11.5B since 2005 to build bases, police stations and border outposts for the Afghan Army. The Special Inspector General for Afghanistan Reconstruction told the Commission that the entire investment is at risk because the Afghan government cant maintain the facilities.

The State Dept. wants to transfer two counter-narcotics program worth about $2B to the Afghans but "has not addressed how and when the Afghan government will be able to assume control and sustain day-to-day operations," according to the Commission's report.

Without immediate and effective attention to these and other sustainability problems, the United States faces a vast new toll of waste in Iraq and Afghanistan. Beyond the potential direct waste of U.S. taxpayers money lie both the opportunity cost of the foregone projects that might otherwise have been completed with the funds and the political cost to U.S. interests if local nationals feel betrayal or resentment when promised improvements to their lives do not materialize.

The Commission wants the Defense and State Dept. to report to Congress by Dec. 31 on what projects will turn into waste if the host governments cannot or will not commit the funds, staff and expertise to operate and maintain them. Those losers must be either canceled or redesigned to head off more waste.

Republicans and Democrats should jump at the chance to save some cash in the money pits that are Afghanistan and Iraq.