PR Society of America has made a major strategic error in presenting its take on a membership survey rather than the survey results themselves, says PR pro and blogger Bob Conrad.

Conrad, who has a Ph. D. in educational leadership/higher education administration from the University of Nevada-Reno and is a public information officer with the Nevada Dept. of Conservation and Natural Resourdes, conducts TheGoodtheBadtheSpin.com blog and is the author of a book of the same title.

His blog yesterday said that PRS chair Rosanna Fiske, in presenting the Societys interpretation of the results rather than the survey itself, was likely to incite its regular critics (such as this website).

The Society told Conrad that it only posted the top findings of the survey because of competitive reasons. Thats an excuse that doesnt wash.

Its a violation of the standards for reporting research results, said counselor Alice Irvan, a member of PRS, in commenting on Fiskes presentation. 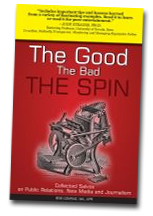 Said Irvan on the Conrad blog: I would have advised Fiske that it was not in anyones best interest to use the glowing language about the survey results in her blog. It is important to interpret results accurately and to report accurately to members.


Only One-Fifth Of Lapsed Members Renew

Conrad notes that Fiske seems proud of the finding that nearly one-fifth of lapsed members are likely to renew.

This also means that four-fifths are not likely to renew, says Conrad.

He finds it disingenuous that Fiske should say that Society members are incredibly satisfied although member satisfaction is only at the 56% level.

He also finds the survey shows a difference between satisfaction with the Society on the national level and satisfaction on the local level.

Members are posting in the Society e-group and on LinkedIn that they get far more from their local chapters than they do from national but that national dues are four and five times that of their chapters and threaten to go higher.

Why should members pay more to national when local offerings appear more relevant to their careers, asks Conrad.

One of the statements from the Society on the results is that it needs to continue to focus on access to information.

This should be changed to read that the Society needs to continue to improve access to information, said Conrad.

A great deal of information is being withheld from members including the identity of Assembly delegates, how they vote and what they say. Transcripts of the Assembly have been withheld since 2005. IRS Form 990s, with much information that is not in the audit, were withheld from the 2009 and 2010 Assemblies.

Said Irvan: It would have been wiser to release results to members with an unbaised interpretation. At least our leader saw the wisdom of releasing results. I will take a look at the results and write a comparison with the blog interpretation, said Irvan.