VMS, the video monitoring giant that surprised the PR industry when it shut down last week, filed for Chapter 7 bankruptcy protection in federal court Aug. 31, listing nearly $17M in assets and liabilities of more than $8M. 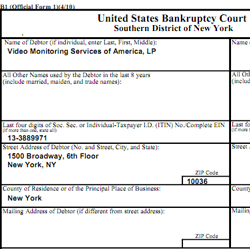 Hundreds of unsecured creditors are listed in the filing with the U.S. Bankruptcy Court for the Southern District of New York. Capitol One, which cut off financing to the company last week precipitating its shutdown, is the companys largest secured creditor with $5.6M owed, according to the filing.

VMS also lists 97 pages of contracts not yet fulfilled, ranging from APCO Worldwide to the Zoological Society of San Diego.

CEO David Stephens told staffers last week that high costs from rent agreements, coupled with VMS' lack of market share in the social media monitoring space were among factors contributing to its downfall.

VMS said in its Chapter 7 filing that among its $17M in assets are accounts receivable totaling $6.4M, with another $9.7M in office equipment and supplies.

VMS's board of directors, including Robert Waggoner, Frederick Wynne, and Sandra Wynne, signed off on the bankruptcy after a meeting Aug. 24. Law firm Cole, Schotz, Meisel, Forman & Leonard, and financial advisory firm J.H. Cohn are working the bankruptcy for VMS.