Just as they are in the mainstream media, President George W. Bushs credit card wars in Afghanistan and Iraq were AWOL during last nights Republican debate. That's a sin. 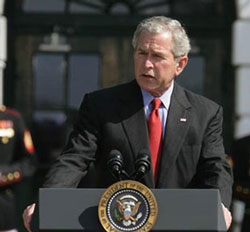 To his credit, Congressman Ron Paul, a no-shot candidate, did offer a quirky way to fix the mess. He believes removing air conditioners from the troops would result in a speedy conclusion of the conflicts. After all, who wants to enlist for service in the desert? Paul gets an A for creativity. The rest of the pack flunks.

Nobel prize winning economist Joseph Stiglitz puts direct government spending for the wars at $2T, or $17K per household. He expects the tab to rise by more than 50 percent as returning troops receive disability payments and medical treatment.

Writing Sept. 1 for the Project Syndicate, Stiglitz says the nations unemployment and deficit woes can be traced to the wars in Afghanistan and Iraq. Increased defense spending, together with the Bush tax cuts, is the key reason why America went from a fiscal surplus of two percent of GDP when Bush was elected to its parlous deficit and debt position today.

The wars have undermined Americas security in ways that Osama bin Laden could not have imagined, according to Stiglitz. Americas real strength, more than its military and economic power, is its soft power. Its moral authority. And this too, was weakened: as the U.S. violated basic rights like habeas corpus and the right not to be tortured. Its longstanding commitment to international law was called into question.

With bold proposals to put America back to work, President Obama gets a golden opportunity to re-launch his Presidency tonight. If Obama fails to hit his stride, his re-election hopes take a big wallop. Thats why its so important that Afghanistan and Iraq get some play during the next Republican debate.

One of those guys could be the next president.