September 12 is certainly a big day for conservatives throughout the land. Glenn Beck returns to the air (okay, the Internet) with a two-hour show that debuts on GBTV.com at 5 p.m. today. 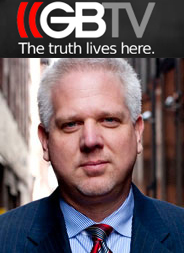 In his promotional pitch, the Beckster tells followers there now will be no more faking illnesses to ensure youre home to watch Glenn on Fox News. He also takes a not so veiled shot at his former employer. GBTV is packed with entertainment and information featuring Glenn Beck like youve never seen him before. No middle man. No filters. Beck's return is newsworthy because he is basing his program on a subscription model.

According to Armey, the march marked when the whole world knew the Tea Party was a force to be reckoned with, and that we are not going away. The posters go for $9.12. Bargain seekers can get two for $15. FreedomWorks urges its fans to jump on the deal because supplies are limited.

Speaking of the Tea Party, it co-hosts the big Republican debate tonight with CNN. Tea Party favorite Rick Perry, who received the endorsement today of fellow Governor Bobby Jindal, is expected to clash with Mitt Romney, not a friend of Armeys people. That's entertaining fare for people of any political stripe. A CNN/ORC International poll released today finds that the Texas Governor is beating rival Mitt Romney among Republicans and independents leaning toward Perry by a 30 to 18 percent margin.

Note to President Obama: CNN and the Tea Party slated the debate for 8 p.m., which is an hour after the Monday Night Football kick-off between the New England Patriots and Miami Dolphins. The debate is supposed to end at 9:30, a half hour before the Oakland Raiders tangle with the Denver Broncos. The president gave his big jobs speech at the un-presidential hour of 7 p.m. last week to avoid conflict with the NFLs season opener.