The in-person Assembly of PR Society of America will be eliminated if the Assembly does not pass a $30 dues hike, teleconferences were told yesterday by treasurer Phil Tate.

Mark McClennan of Schwartz Communications, in a posting on the Assembly e-group, expressed his extreme concern about the threat to overturn the way the Society has been governed for more than 40 years.

McClennan, nominee for at-large director, said leaders are playing a bit too hardball and (are) likely to engender some very negative feelings. 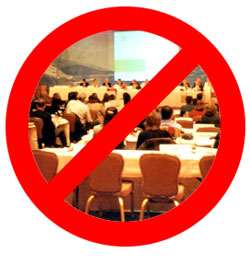 Also to be eliminated is the $140K June Leadership Rally for 134 chapter presidents-elect, district and section heads (who each get a $550 stipend plus five free meals).

There would be no free webinars next year, which had been held out as a benefit if the hike were passed. There wont even be the free sponsored webinars that have been offered in the past year, Tate said.

Up for possible elimination in 2013 would be the printed versions of Tactics and Strategist, he added.

In reply to a question, Tate said there might be more increases starting in 2013. One possibility is linking dues to increases in the Consumer Price Index so that small annual increases would be used rather than a large jump every ten years or so.

McClennan said that there are many other things that could be cutthat are referenced as potential cutsbefore the board cuts the one chance a year to meet and give input to national in person.

Both Tate and COO Bill Murray refused to give specific dollar figures when pressed to do so by WestFair chapter president Ken Koprowski.

Chair Rosanna Fiske told the a.m. teleconference that the Assembly would be conducted via telephone like yesterdays conferences. She did not take part in the p.m. conference. It was explained that she had a scheduling conflict.

Direct questioning of PRS leaders was not allowed on either call. Questions were posted on an accompanying website and read off by Candice Bellittera, chapter relations manager.

Turnout was light as indicated by the fewer than half dozen questions posted in each of the two sessions.

One questioner wanted know what dress was appropriate for the Assembly and was told by Fiske, business casual.

McClennan said the low turnout for the teleconferences was a harbinger of what might happen if the Assembly were turned into a teleconference.

Tate, answering this in an e-group posting, said Id like to believe that a virtual Assembly would be an easier and less expensive way for delegates to participate and, thus, would increase engagement.

He noted that one meeting of the national board this year, to save money, was via teleconference rather than in-person.

Transporting and housing 17 directors who come from all parts of the U.S. for two-day meetings can cost about $1,000 each.

Fiske in the a.m. session reiterated her plan to disperse the Assembly starting with lunch. Topics will be assigned to the 30 or so tables of ten as well as reporters and facilitators for each table. These groups will then be sent to various parts of the hotel to talk among themselves for an undefined time. Findings will be compared at the reconvened Assembly, which has a hard landing at 5:30 p.m. A two-thirds vote would be needed to extend it.


Tate Refuses to Give Figures

Koprowski, president of Westchester/Fairfield (135 members) asked for the dollar costs of the programs being given up vs. the dollar cost of new programs.

Tate answered: I dont have the specific dollar figures in front of me nor do I think that is important for this. Part of what were doing in todays call is to give a top line view of the types of things that would be eliminated if the dues level stays the same.

Koprowski, who teaches at the Uconn School of Business, New York University and Pace University in addition to having his own firm, pressed Tate for a more specific answer, saying, My board members are all financial PR experts and need numbers to understand the give and take you suggest.

The directors include 2001 national president Kathy Lewton, past chapter president Robert Petrausch of Iona College, Don Levin of Levin PR and Marketing, and Ian Kerr, retired counselor and president emeritus of the chapter.

Tate replied: I dont know the best way to answer that without getting so deep into the weeds. Im not sure Id be serving the purpose.

He then asked Murray to address the question.

Murray, his voice cracking at almost every other word because of his spasmodic dysphonia, http://en.wikipedia.org/wiki/Spasmodic_dysphonia said, Maybe what we should do is circle back again after this call and talk a little bit and what we might do collectively. I would be happy to do that with Ken and try to do this. I will deal with you off line if that is helpful.

Koprowski, reached by phone this morning, laughed when we asked if he were going to call Tate or Murray. He said we could quote his laugh.

Koprowski listened without comment as we summed up what is going on as follows.

Leaders and members are afraid to ask a key questionwhat is in the new three-year contract of Murray just approved by the board? He was paid $373K in 2009 in pay/fringes and refuses to give not only terms of the new contract, but terms of the current one.

His voice handicap apparently keeps him from making public or media appearances although he carries the title and pay of president and was supposed to be the Societys spokesperson. He has not appeared before the New York chapter in four years and eight months nor any other New York group that this writer knows of (even though h.q. staff should be out promoting the PRS Business Case for PR.

As usual, PRS is withholding IRS Form 990 from the membership and Assembly that would have his 2010 pay. The form was originally due May 15.

A delegate has posted on the PRS website that the Society should re-examine having its h.q. in expensive New York where the occupancy costs were $755K in 2009, latest available figure.

We told Koprowski that information blockage by PRS has reached new depths and includes the indefensible absence of Fiske from the afternoon call. It was announced that she had a professional commitment to her university.

She and the board have blocked, for the first time in any PRS teleconference, live calls from participants. The calls are now on a listen-only mode with questions taken on an accompanying website where they can be moderated (censored).

Fiske, we told Koprowski, has a habit of ducking when bad news shows its face. She let Tate announce on the a.m. session that the in-person Assembly and the Leadership Rally would be cancelled if the dues hike failed.

Although she lambasted Burson-Marsteller when it was caught anonymously spreading negatives about Facebook, she let new Ethics Chair Deborah Silverman criticize Ketchum earlier this month when that firm was caught tricking food bloggers into thinking they were getting a fresh-cooked meal when they were getting frozen foods.

Timid chapter presidents and delegates dont bring up the main financial facts--$2.9 million lost on APR from 1986-2002; millions of revenue lost because out-of-town oriented leadership allowed only one New York national conference in 23 years and still hasnt scheduled another one; many hundreds of thousands lost because the exhibit hall was cancelled from 1995-99 after exhibitors organized and demanded better treatment at conferences and more conferences in New York; loss of hundreds of thousands and maybe millions in revenue because students can only join the Student Society at 300 of the 4,000 colleges (PRS student membership is 10,000; there are at least ten million college students), and continued printing and mailing of Tactics and Strategist when these should be PDF-only. Printing cost $171,218 in 2010 and postage/shipping $114.131.

What should be looked into is the $731,750 spent on pay/benefits for T&S staffers when almost all the articles are written by members or other contributors.

PRS provides audited reports to members but they are no substitute for members working at h.q. who report to the rank-and-file members and not to leaders and staff.

Rank-and-file members know little about how the money is spent at h.q.