PR firms that were once salivating over the prospects of hefty cleantech retainers are now closely monitoring the D.C. tussle over the bankruptcy of Solyndra, the solar company that received $535M in federal loan guarantees. 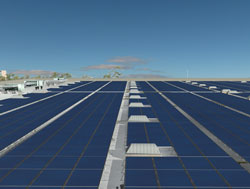 That corporate downfall is indeed music to the ears of those opposed to President Obamas jobs program.

The president came to Washington with the promise to create hundreds of thousands of greentech jobs. Hes delivered on that. David Foster, executive director of the BlueGreen Alliance, a labor union and environmental group coalition, says the Recovery Act created or saved 997K jobs in areas like advanced battery production and energy-efficient projects. He maintains that $46B in federal investment attracted about $150B in additional private sector money.

Thats a good return on investment.

In todays highly-charged D.C. environment, Solyndra is the poster child of how the president was supposed to create jobs. Thats what Minority Leader Mitch McConnell said today:


And now were hearing reports that the White House fast-tracked a half billion dollar loan to a politically connected energy firm that their own analysts said wasnt ready for prime time. This place was supposed to be the poster child of how the original stimulus would create jobs. Now its bankrupt and most of its 1,100 employees are out of work. And they want a stimulus.

McConnells and the GOPs strategy is as plain as day: position Solyndra as Obamas Enron.

If thats allowed to happen, the Republicans will choke off federal support for cleantech, which would be a national tragedy for all, but Big Oil. The U.S. will blow any hope of regaining leadership in a business that it pioneered.

And as for PR firms: good-bye to those hefty cleantech retainers. It surely was a sweet dream.