As the Dow Jones Industrial Average tanked nearly 400 points today following yesterdays big stock market sell-off, my guess is that New York Stock Exchange management would gladly turn over the trading floor to the young and earnest Occupy Wall Street demonstrators who have been staging a carnival of protest in lower Manhattan since Saturday. 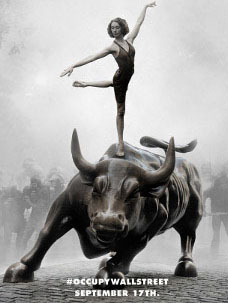 They claim to be protesting on behalf of the 99 percent of America which doesnt control this countrys wealth. Its a good time for the Big Board to take a breath. Shut it down, indeed. Let the rabble occupy the place until next weeks opening bell.

More than 5,000 protesters kicked off the OWS action and a couple of hundred remain encamped downtown. Heavy rain starting later continuing into the weekend will dampen their enthusiasm and put a likely end to the protest. The protest gets an "A" for effort.

Organizers have complained of a mainstream boycott of the so-called days of rage. Thats not completely true. And to be honest, OWS didn't turn out to be "Arab Spring-like" in its influence and number of people involved. (OWS says its happy with the tens of thousands of supporting "Tweets" received worldwide. Tens of thousands feet on the street would have been much more impressive.)

The Wall Street Journal (Sept. 20) did run a piece about police arresting protesters wearing masks. That 150-year-old law went on the books because tenant farmers disguised themselves as Indians when fighting agents of landlords. It was updated during the 1960s to ban masked gatherings of two or more people. [You can bet New Yorks Finest will be extra vigilant as Halloween approaches. Watch out Greenwhich Village parade-goers.]

The cops also cracked down on a protester who was chalking a sidewalk, reported the paper. One officer perhaps didn't appreciate the Gandhi quote on non-violence that was written by an Oakland man who got a summons for "damage to the sidewalk."

OWS organizers say the mainstream media would have gone all-out if 5,000 Tea Partiers showed up to protest in New York. Thats iffy. Besides cheerleader Fox News, the Tea Party would be given a pass in the nations media capital. Any coverage would surely focus on the Tea Party as a front group for high-rollers such as the Koch brothers and FreedomWorks.

New York City is a big place with lots going all. For instance, the OWS action coincides with the opening festivities of the United Nations, which has received a lot of attention in the press. Poor scheduling contributed to the lack of coverage of the lower Manhattan protests.

The OWS braintrust should do a better job planning their return trip to the city.