Fleishman-Hillard last week picked up one of the most important jobs in the energy PR sector: selling the public on hydraulic fracking, the 60-year-old process of blasting water, sand and chemicals into shale formations to extract natural oil and gas.

The American Petroleum Institute awarded the Omnicom unit the work under its Energy and Shale campaign. The PR firm is to increase the publics understanding of the issues surrounding shale oil and natural gas. Edelman remains ad/PR firm for API. 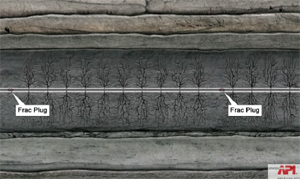 Fracking was off the media radar until recent estimates emerged that the Marcellus shale formation stretching from upstate New York to West Virginia could turn the U.S. into the Saudi Arabia of Shale. The New York Times weighed in with a hard-hitting investigative series on fracking earlier this year, depicting a lightly regulated process that pollutes groundwater with toxic substances. It was then off to the media races. Environmentalists piled on.

Undoubtedly, shale is going to be a big part of the nations energy picture, especially if short-sighted Republicans strangle development of the alternative energy sector that has been nurtured by the Obama administration. F-Hs biggest challenge is open up the highly secretive energy sector. Interior Secretary Ken Salazar made that point by telling reporters at a conference last week in San Francisco:

Unless industry is forthcoming and is disclosing the fluids it is injecting underground, its going to become the Achilles heel that essentially destroys any future for the natural gas industry and shale here in the U.S.

What the energy sector does not need are ridiculous PR stunts, such as the one perfected by Halliburton? Speaking at the Colorado Oil and Gas Assn. lunch last month, CEO Ken Lesar raised a container of a fracking fluid made by his company that is produced from food industry ingredients.

He then had an underling drink the Clean Stim fluid, leading one to wonder why didnt Ken take his own swig of the stuff?

Another thought: the people living in the hard-scrabble areas of the Marcellus Shale cant afford to a personal taster or an executive flunky to test their water supply.