How do you promote development of dirty oil from Canadas tar sands, an energy/water intensive strip mining process that would be a major contributor to global heating? Or, as NASA climatologist Dr. James Hanson famously warned, if tar sands are fully exploited it is game over for Earths climate. 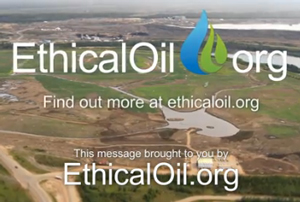 The good folks of Canadas Ethical Oil Institute have come up with a clever PR angle for the tar sands: bash Saudi Arabias human rights record. As the New York Times reported Sept 26, the Saudis have gone berserk over an ad from EOI about conflict oil from the Kingdom.

The 30-second spot says North America buys more than 400M barrels of oil from a country that oppresses its women. Why are we paying their bill and funding their oppression, asks the spot. Good point! The ad pitches Canadas ethical oil (e.g., tar sands) as an alternative and a way to pressure the Kingdom for reform.

EOI gleefully claims the Saudis launched a ham-fisted legal threat to squelch the spot. That, of course, only drew more attention to the ad, leading to pieces in top-shelf publications such as the Times. Bonehead PR.

This week Saudi Arabia did improve its human rights report card score from F- to F+, according to David Keyes, executive director of Advancing Human Rights. He cited King Abdullahs decision to let women vote in municipal elections in 2015. That shred of decency occurred two days before a Saudi court sentenced a women to 10 lashes for the horrendous crime of driving a car.

Saudi Arabia is planning a big push for a seat on the United Nations Security Council. During the next two years, it plans to highlight its participation at the world body and its national accomplishments. Keyes believes its unconscionable that in the 21st century a woman cannot drive herself to work, a restaurant or just for the fun of it.

King Abdullah should skip U.N. PR push. If he wants to a seat at the Security Council table, the King should earn it by granting equal rights for women. That would make the Saudi seat a shoo-in.