New York Citys labor unions are finally showing a pulse, or at least one is.

In the understatement of the year, Jim Gannon, spokesperson for the Transport Workers Union 100, said: I dont know why it took us so long to do it, in referring to the unanimous executive board vote Wednesday night to support the protesters of the nearly two-week old Occupy Wall Street demonstration. 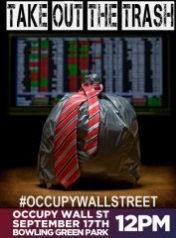 Like the mainstream media that failed to cover the beginning of the occupation, labor has finally jumped on board.

Unions should be a natural ally of anti-Wall Street campaigners. They have been battered by corporate mergers, plant shutdowns, revamped contracts and globalization.

Gannon credited Occupy Wall Street for bringing a new public focus in a different way to what weve been saying all along. While Wall Street and the banks and the corporations are the ones that caused the mess thats flowed down into the states and cities, it seems theres no shared sacrifice. Its the workers having to sacrifice while the wealthy get away scot-free, he told the Village Voice.

Labor support is a great PR move for Occupy Wall Street. It kills criticism of the protesters as either over-educated, out-of-work rich kids looking for some fun in the big city or aging hippies seeking to return to the golden days of the 1960s.

There is another practical benefit of TWU support. As Gannon noted, the Occupy Wall Street people seem to be hanging out there getting the crap beaten out of them, and maybe union support will help them out a little bit. Gannon didnt mention that fellow union brothers and sisters of the NYPD are applying those beatings or spray peppering the protesters.

This blogger doesn't expect the cops to start slugging bus drivers or subway conductors. More importantly, when will the cops realize they have far more in common with the protesters than the job-killers of Wall Street?

Representatives of the 38,000-member TWU plan to join a rally later this afternoon at City Hall and participate in the Oct. 5 march to Wall Street. They are part of a union that has 200K members in 22 states.

Those unionists are potential allies for the smaller anti-Wall Street demonstrations that have been popping up across the U.S. Other unions should follow TWUs lead.