Delegates of the Society of Professional Journalists, at their meeting in New Orleans Sept. 27, voted 85-71 against reviving the Helen Thomas Lifetime Achievement Award which SPJ had bestowed since 2000.

Charges flew that the 50-year White House correspondent was anti-Semitic and anti-Israel after she said in 2010 that Israel should get the hell out of Palestine and further said that Congress, the White House and Hollywood, Wall Street are owned by Zionists. 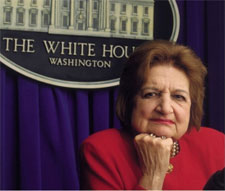 Hearst fired her as White House correspondent in June 2010. She now works for the Falls Church, Va., News-Press. Mediaite reported that her name plate has been restored to the first row of the White House press room.

Former national president Kevin Smith, an instructor at James Madison University, Harrisonburg, Va., said having her name on the award would make it difficult for the SPJ to promote high ethical standards.

Ethics committee chair Smith said SPJ would have to look people in the eye and say, We will condemn your hated, bigoted, racial remarks, but well protect our own when they do.

Other delegates said free speech was a victim of the SPJ action and that Thomas said nothing that hasnt been said by many others including John Mearsheimer and Stephen Walt in their 2007 book, "The Israel Lobby and U.S. Foreign Policy."

Delegates, after a half hour of debate, voted down an initial resolution in a voice vote and a second resolution when a roll call vote was demanded. The issue had been hotly debated for months in e-mails among members.

Former SPJ president Al Cross asked, If we created the award today, would we name it after her?

Too many SPJ members simplistically processed her remarks, and its no wonder that Americans haveand have had for quite some timea lopsided view of he Israel/Palestine conflict.

She castigated the ethics committee for not defending Thomas right to free speech and failing to talk to Thomas and to ask questions that would help ensure her views were debated in a full and accurate context.

This failure violated the SPJ Ethics Code that says journalists must seek truth and report it, minimize harm, and act independently, she said.

Her remarks, carried in the News-Press, said that Thomas is herself Semitic and that her criticisms were of the government and not the Israeli people.

Tatum, now with Media Salad, Denver, said It is entirely possible to criticize Israels government without harboring a trace of anti-Semitismas Israelis demonstrate every day. But that critical distinction is lostoften intentionallyon a lot of people in the U.S.

What really ticked off SPJ members was Thomas criticism of the lobbys influence on American media, she said. Thomas wants people to be aware of it and how it potentially affects the news and opinion that shape our countrys views of the Middle East, she added.

Concluded Tatum: Perhaps a journalism organization will be courageous and principled enough to give Helen Thomas the praise she deserves. Clearly, its not this one.

News-Press correspondent Lindsay Huffman, writing a more extensive story for the News-Press, than appeared on the SPJ website, quoted delegate Brandon Ballenger, co-sponsor of the second resolution, as saying, This is an achievement award, not a speech issue. If we dont stand by it, then it looks like were taking a stance on her speech.

Peter Sussman, author of the second resolution and a member of the ethics committee 15 years, said he does not believe the vote reflects the values of this Society. I fear for the future of our organization. I dont believe were prepared to go to the mats for values we espouse to others, including freedom of speech and respecting diversity of opinion.