Did you catch the fawning profile of Republican presidential candidate Rick Perry that ran in the Wall Street Journal weekend (Oct. 1/2) edition? This blogger is unsure whether it is PR gold or a flat-out embarrassment to the Texas Governor? 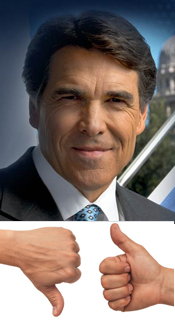 Written after Perrys sketchy performance during the last GOP debate, the piece excuses Perry for lacking a dazzling intellect. According to the item, the Governor learned during those precious days as yell leader at Texas A&M University that charm, charisma and the ability to survive the hazing of upperclassman in the schools Corps of Cadets far outweigh any brainpower. Take that pinhead, Mitt Romney, graduate of Brigham Young University, Harvard Law and Harvard Business School.

Rick didnt do too hot in school, graduating in 1972 with a 2.2 GPA. Theres no reason, however, to be alarmed. Perry got that C average because of dual demands of studying and military drills. Look at the bigger picture: Yet he learned an important lesson that eventually led him into public life, after a stint flying cargo planes in the Air Force. He had a way with people. He parlayed his popularity into the student government position of social secretary, wrote Miguel Bustillo.

Perry is described as an irreverent prankster. The Journal recalls the time that he placed live blackbirds in a students closet to create a putrid stink during a vacation break. Note to PETA: the paper didnt disclose the fate of those blackbirds, or how Rick rounded them up in the first place. If Romney was ridiculed for tying the family dog to the roof of the car during a vacation trip, the ghosts of those blackbirds may come back to haunt Rick.

But dont be too alarmed dear readers. The Journal says such shenanigans were still common when Mr. Perry was on campus, but were slowly being rooted out by then A&M president James Earl Rudder, a WWII hero. He successfully pushed to modernize the school to combat dwindling attendance.

Fair question: Was enrollment sinking like a rock because guys like Perry ruled the roost at Texas A&M?

Give Perry a high-five for sticking it out. The Journal notes that 31.5 percent of Perrys fellow fish cadets dropped out in 1968.

A snappy picture of Perry dressed in his Corp. of Cadets uniform accompanies the puff piece. In the background are Perrys yell leader and class officer uniforms. That picture may soon find a home in the Oval Office.

One saving grace for Perry: he, of the aw-shucks conservatism and swashbuckling anti-Washington rhetoric is not quoted in the WSJs mash note. He can deny having anything to do with the WSJ profile.