The Occupy Wall Street crowd is battering JPMorgan Chase for a posting on its website about the $4.6M donation it made to the New York City Police Foundation, the biggest gift in the Foundations history. It's pitched as an untimely blowing of one's own horn. 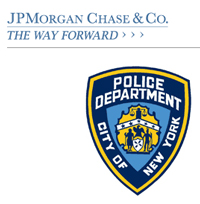 Gleefully, Occupiers depict the gift as a direct payoff to New Yorks Finest who have been pepper spraying, beating and tricking them into a stroll across the Brooklyn Bridge, a mass constitutional that resulted in the arrest of 700 protesters.

The release quotes JPMorgan Chase chief Jamie Dimon thanking the police for putting their lives on the line each day to keep us safe.

Safe from the rabble?

While Police Commissioner Ray Kelly, in turn, expresses his profound gratitude to the bank. Its not clear if Ray genuflected before the JPMorgan Chase boss. The cash also paid for security monitoring software that would make George Orwell proud of the NYPDs Lower Manhattan Security Initiative. Smile, youre on NYPD TV.

This blogger is not a defender of greedy banking giants like Dimons outfit that triggered the financial collapse that has thrown millions of people worldwide out-of-work. The bank does have an out in the donation flap.

In a bone-headed oversight, the banks crackerjack web team did not date the release. Others are dated, which makes the Foundation release stick out like a sore thumb. That leaves a great opening for the media-savvy Occupiers to call the NYPDF money a tit-for-tat gift. In other words, Dimon has purchased his own security team or goon squad to put down the protest.

A Chase spokesperson, who did not want to be identified, told me today that the donation, a mix of cash, equipment and other resources, starting flowing to the Foundation at the end of 2010 and ended during the first-half of this year. Chase posted the gift sometime during the summer during the website overhaul. The spokesperson stressed that the donation was made well-before plans for the Wall Street occupation become public.

When I suggested that JPMorgan Chase could demolish the payoff angle of the Occupiers by dating the release, the PR executive said, You are 100 percent right.