Sarah Palin told a conservative talk show host on Wednesday that she wasnt going to run in the 2012 election, a move she said would allow her to speak frankly about the weighty issues of the day. 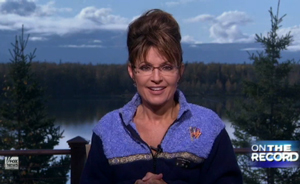 And whats Sarahs initial post-presidential foray into the public arena? Its the defense of Hank Williams Jr., who compared President Obama to Adolph Hitler, the man responsible for the murder of more than six million Jews, destruction of Europe and death of 25M Russians.

The ever-whining Palin, desperate for a hook to remain relevant, turned the Williams non-event into an attack on what she used to called the liberal lamestream media. [When was the last time that Sarah had something positive to say?] Palin believes ESPNs decision to drop Williams intro song from Monday Night Football represents the hypocrisy of the left.

The still Fox TV analyst today told Sean Hannity that liberals can throw stones at conservatives because theyre not going to be held accountable. She conveniently forgets the media backlash against the Dixie Chicks after their criticism of George Bush right before the Iraq invasion.

Like Hank Jr., Dixie Chicks lead singer Natalie Maines had the right to criticize President Bush just as fans and radio stations had the right to boycott their albums. Its called freedom of speech, neither a liberal nor conservative issue.

Palins low-key exit from the presidential contest was a sharp contrast to the day before announcement by Chris Christie that he wasnt going to run. The big difference: political heavyweights were pushing a Christie candidacy. Nobody but Palins huge ego was pulling for the half-term Alaska Governor to run.

Now that Palin is officially out of the race, look for Fox News chief Roger Ailes to pull the plug on her. Fox already has a good supply of loose cannons. There is no need to give airtime to a washed-up politico like Palin. What's the possible return for Fox?