5W Public Relations chief Ronn Torossian has written a book about PR that is unlike any other that Ive read in my more than 20 years of covering the communications business at ODwyers.

For Immediate Release is brimming with spunk and attitude. Its a street fighters guide to PR. Of course, thats what one would expect from the brash Bronx native whose New York-based firm, which officially opened in 2003, now ranks among the top 25 independent shops in the U.S. Thats quite an accomplishment.

FIR is light in pie-in-the-sky stuff and heavy on practical ways to show how modern PR can help brands, innovate, market and message well. 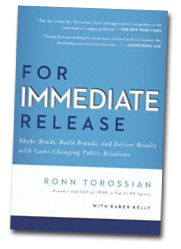 Torossian says great PR not only creates excitement and builds equity for brands, but is needed by any business or anyone with a pulse for that matter.

Known for his aggressive, in-your-face practice of PR, Torossian shoots down pop cultures glamorous Sex in the City and reality show image of PR as totally unrepresentative of the 24/7 grind of the business. The author, in fact, turned down two reality show offers because he believes all press is most certainly not good press.

To Torossian, PR is a mix of journalism, psychology and lawyeringits an ever-changing and always interesting landscape. That means the ability to deal with a broad range of clients from rapper Lil Kim, who was convicted in 2005 on three counts of perjury after a Manhattan shooting, to the Christian Coalition, a target of bias by some members of the mainstream secular press.

Professors in the hallowed halls of academia will object to Torossians media relations advice of retaining a high-powered attorney to threaten the network for various misrepresentations and legal wrongdoings or digging up dirt on an especially adversarial reporter. But those educators would be missing the big picture.

The In G-D We Trust, Not the Media chapter is the best part of the book. Torossian understands the importance of establishing friendly and professional relationships with reporters. Both sides need each other. One of his rules for PR success: Get to know reporters. Offer to buy lunch, dinner, drinks, etc. Give out your cell phone number. Get to know them and it will pay off. You will be called not only as a source but as a background source. You can offer exclusives, speak comfortably off-the-record, and receive helpful information.

The key for PR people, however, is to realize that reporters are not your personal friends.

The story comes first for them and it always will, just as your personal story, brand, or job comes first for you, he writes. Torossian recalls fighting off a producer for 60 Minutes who wanted to interview a Christian ministry that he represented. The producer threatened to cut his client off from future shows if the current interview request was not granted. Torossians response: Is that I promise?

Torossian and client didnt consent to an interview because they decided it would be hostile. The better option: a pitch to Fox News or a Christian broadcaster where the odds would be in our favor for a fairer outcome.

In the media relations realm, its important to realize that people are human and we bring our humanity, warts and all to the process. The most seasoned reporter can be seduced by the possibility of a career-boosting gotcha story, while the most close-to-the-vest PR person can let emotions overtake him or her.

You have to get up every day and try again -- make your case, talk to reporters, do your homework, read, stay on top of trends, and maintain your values no matter what. And stay in the fight, writes Torossian.


Got to be authentic

FIR echoes some of the best advice that I received from mentors such as Barney Gallagher, who published the hard-nosed Gallagher Report newsletter covering advertising and marketing, and the Franciscan Brothers, who taught at my Brooklyn high school. Torossian follows Gallaghers mantra of going for the jugular when he urges PR people to fight back against arrogant or misleading reporters, and adheres to the Franciscan philosophy of being real.

Authenticity is a big part of Torossians PR playbook. FIR has a good section about how Wal-Mart stumbled during the mid-2000s when it moved from its roots, attempting to go for a more stylish and upscale look. The once stalwart and dependable retailer showed how even, large, iconic, and successful brands can make missteps, lose value and sales and rattle consumer trust by trying too hard to become something theyre not.

Wal-Mart has since reasserted itself as a discount brand leader that helps its core customer base reap great savings on basic items like T-shirts, grocery items, jeans and toiletries.

How does a business become authentic? Whether a brand is large or small, or a mass-merchandise or luxury product, the heart of its authenticity is inconsistently practicing in what it preaches and delivering on its promise. When a brands language, look or actions become out of sync with customers expectations, brand integrity suffers and trust is broken. One of the hallmarks of an authentic brand, business, or personality is how it connects with its audience on a personal level, writes Torossian.

The PR pro notes that insurance giant Allstate also stumbled on the authenticity front when it released a study ranking safe driving based on zodiac signs. That deviated from the consumer understanding that insurance is a serious business. The release was posted on its website in good fun, but critics and consumers didnt get the joke. They contacted the insurer to see if it actually did factor in zodiac signs to set rates. Allstate pulled the study and reassured customers that it was posted for entertainment purposes only.

Torossian credits Allstate for taking down the study, and quickly setting the record straight. His suggestion for a PR person who wants to move beyond a brands marketplace image: Honesty and respect, and how you express that to your audience is the essence of authenticity and of the personal aspect of your brand. Every business decision you make should start with the question, If I were the person on the other end looking at this, what would make me feel welcome and included, even though I may also feel challenged and surprised? Find and act on the answer and you authenticity will rarely go off course.

Torossian comments about the major PR crises suffered by Toyota, BP, JetBlue and Carnival Cruise Lines. He is at his best, though, in describing creative campaigns conducted for 5W clients, such as watchmaker Philip Stein, Avenue and Camp Bow Wow.

Steins timepieces use a natural frequency technology that measures stress. 5W crafted a Have You Slept with Philip Stein campaign that sent watches to high-profile executives, such as former BP CEO Tony Hayward, who were asked whether the watch calmed them down.

Torossian, a watch collector, reports that many executives found that Steins watch delivered as promised. Stein has appeared three times on Oprah Winfreys show. His watch earned Winfreys most favorite things nod in 2003, 2005 and 2010.

For plus-size Avenue clothing chain, 5W organized a mock protest of large women during New Yorks Fashion Week to protest their underrepresentation on the runways. It scored more than 150M media impressions.

Torossians book is for anybody who wants to get it when it comes to how PR can advance their personal and professional lives. College students especially should put their dusty PR textbooks aside and pick up a copy of FIR.

It is available now on Amazon and in bookstores beginning Oct. 15.

You wont be disappointed.