News Corp. says CEO Rupert Murdoch is worth every cent of his $25M direct compensation because his pay structure is perfectly aligned with the interests of shareholders. Since Murdochs family controls 40 percent of News Corp.s voting shares, that point seems a little weak. 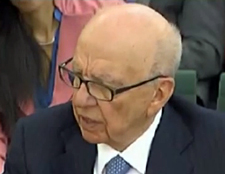 In yesterdays Securities and Exchange filing to counter Institutional Shareholder Services recommendation that shareholders vote against 13 of 15 News Corp. directors, including Rupe and sons James and Lachlan, the media combine defended its CEOs compensation.

To justify Murdoch's haul, it refers interested parties to page 35 of the proxy statment. That's where it get dicey:


With his guidance, the Company delivered strong financial results, strengthened its core operations, continued its international expansion plans and optimized its portfolio of businesses through a number of strategic acquisitions, investments and divestitures during the year. He championed a number of important strategic innovations, including content monetization initiatives across many of the Companys properties, the launch of the first digital-only newspaper and the entry into the education industry with the acquisition of Wireless Generation.

That means the board gives Murdoch credit for unloading the $580M MySpace acquisition mistake that he championed for peanuts, unveiling The Daily website, which Bloomberg reported Sept. 28 is attracting less than 25 percent of the readership that it needs to turn a profit, and acquiring Wireless Generation, a long-shot foray into the education market.

Murdoch, 80, could have pulled off a major PR coup by forgoing the $12.5B bonus earned last year. James, who is CEO of the phone hacking scandal-battered News International, gave up his $6M bonus. Rupe, in fact, still has time to become a corporate trend-setter. How about agreeing to work for $1 a-year? After all, Murdoch has all that News Corp. stock to fall back on.

Think of the cheers that Murdoch would receive from the Occupy Wall Street crowd that led a march up Park Ave. to his apartment yesterday. Murdoch, man of the people!

At the very least, with Dollar Rupe at the helm, News Corp.s compensation committee wouldnt have to come up with embarrassing justifications of his pay.