Will billionaire Bloomberg risk being remembered as the guy who cleared-out the park on behalf of the high-rollers on Wall Street who helped trigger the financial mess? 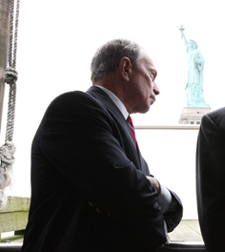 The mayor is on the record of supporting the occupiers First Amendment rights. He says protesters can remain in the park following the big sweep-up as long as they dont lie down or use sleeping bags. Huh! He might as well say, "Go home boys and girls."

Activist groups such as the Working Families Party believe Bloombergs threat to enforce the no-sleeping rule is a back-door attempt to put an end to the protest. It is asking members to be there when the sanitation crews show up at 6 a.m., setting the stage for a confrontation with the police force that is already keeping a close eye on Zuccoti Park.

Meanwhile, support grows for the Occupiers. A Time magazine poll finds that 54 percent of Americans have a favorable impression of OWS, while 23 percent have a negative view. [The token booth at my Brooklyn subway station has put up a big sign that gives directions to Zuccotti Park. The attendant told me that he was tired of telling people to "take the R-train to Rector."]

Polands former president and Solidarity founder Lech Walesa told the Associated Press that he backs the Wall Street protest. We cannot accept a situation when capitalism is making huge money and then does not know what to do with it. It should invest in new jobs, he said.

The former shipyard worker spoke as plans are in place for an Occupy Warsaw demonstration this weekend. Walesa says he either plans to visit Zuccotti Park or draft a letter of support to the Occupiers. He better act quickly.

If Walesa does opt for a visit to NYC, he should drop by and have a chat with Mayor Mike.