OccupytheBoardroom.org, a website promising to deliver messages to top executives of Wall Street's largest institutions, includes a handful of PR executives among its scores of targets. 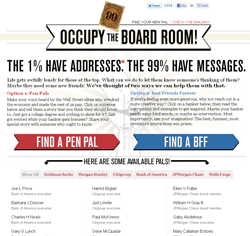 Ed Skyler, head of communications for Citigroup, Lawrence Di Rita, former Pentagon spokesman now senior VP/comms. at Bank of America, and Peter Scher, who leads government relations for JPMorgan Chase are included among 200 board members, CEOs and executives of the institutions the site claims to be able to reach.

Users have the option of sending a bank executive a story about how the financial crisis affected them, or they can "Find a BFF" by offering the bankers "some kind words, or maybe an intervention."

Executives from Goldman Sachs, Morgan Stanley, Wells Fargo are also a focus of the site, which was launched over the weekend. While the operators claim to have the personal contact info for each exec, they said they can't publish the information as the Computer Fraud and Abuse Act calls for 10-20 year prison sentences for sharing such data.

The site, which has taken up the 99% mantra of Occupy Wall Street, has more than 5,000 responses posted since launching Saturday.

The New York Observer said the site was founded by labor groups and organizers.