Travers, Collins & Co., the Buffalo, N.Y., agency which saw its entire investor relations team depart to start a new firm in September, has sued the former staffers and their venture, alleging they hid PR business opportunities to steal TC clients, among other charges. 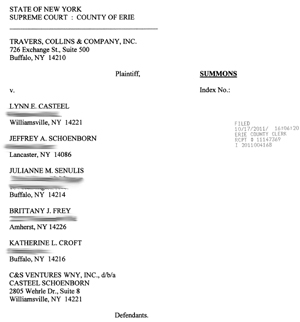 TC filed a civil suit in New York Supreme Court Oct. 17 against the new firm, Casteel Schoenborn, and its individual staffers, including 16-year TC employee Lynn Casteel, Jeff Schoenborn, Julianne Senulis, Brittany Frey and Katherine Croft. Casteel and Schoenborn face charges of breach of fiduciary duty, while the other three are accused of breach of loyalty.

TC did not ask the staffers to sign non-compete agreements.

Other claims in the suit include conversion, misappropriation and unjust enrichment.

We expected the ad agency's owners to litigate, Schoenborn told ODwyers. We believe their allegations are baseless, and we look forward to defending ourselves against them as the legal process runs its course. In the meantime, it's business as usual for us.

According to the suit, Prior, and subsequent, to their voluntary resignations the individual defendants committed various acts constituting breaches of their fiduciary duties, duties of loyalty and theft.

TC alleges that the former IR staffers used company resources to divert business to the new venture and solicit TC clients like Fairway Markets and Hudson Valley Bank for CS.

Among those acts are the firms hiring of Senulis in July at the urging of Casteel and Schoenborn. Senulis acknowledged to principal Bill Collins after resigning that she joined firm with the understanding that the defendants would be leaving in September, according to the suit.

TC, which notes the former staffers filed incorporation papers for the new venture back on June 15 while still employed at TC, said $30K in profit sharing was paid to the staffers days before their Sept. 17 resignations. The firm wants compensatory and punitive damages, as well as court and lawyer costs from the former staffers.

The former TC staffers have 20 days to respond to the suit.

Collins told ODwyers last month the IR unit produced from $400-800K in revenue and that TC will work to rebuild it.