In one of PRs finest moments, Nick Calio, CEO of the Air Transport Assn. of America, held a barf bag in the air during a speech at the Washington Aero Club on Oct. 18 to show just how sick he is with the prospects of a hike in security taxes and a departure tax. 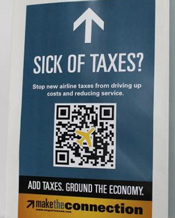 That stunt scored coverage in USA Today. According to the paper, Calio was the toast of the luncheon. The crowd of airline industry execs roared with delight when the ATA chief asked, Its enough to make you sick, isnt it. The air-sickness bags ask, Sick of taxes. Pretty clever, indeed.

Taking a page from the Republican playbook, the ATA contends the tax measure is a job-destroyer. Can class warfare be far behind?

The ATA claims that airlines will have no choice but to offset the higher taxes by trying to adjust airfares or reducing service. Thats a red herring. Airlines have been pretty successful in jacking up ticket and slashing service.

The New York Times reported Oct. 19 that airlines are doing quite nicely these days. "The same thing making many air travelers grumble these daysrising fares with more and more fees, fewer flights, planes filled to the brimare things giving airline executives a reason to smile, it reports.

Other than basket case, American Airlines, domestic carriers are flying toward their second consecutive profitable year in 2011, after losing $55B since 2001. Consolidation of the Big Five carriers, which now control 85 percent of all seats compared to 64 percent in 2000, have provided them an opportunity to squeeze passengers.

The airlines may be handing out Calios air-sickness bags to passengers during the run-up to the key Thanksgiving travel season just ahead of the Congressional super-committee dealine on taxes.

Savvy fliers could design their own bags to say they are sick of no legroom, blankets, pillows and being treated like cattle.

That would get Nicks attention.