For the second straight week in the NFL, a PR pro has become part of a national story. 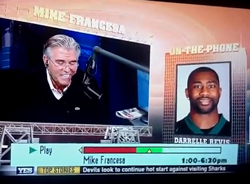 I was on my way home Friday evening listening to the interview as Francesa pushed the line in telling All-Pro New York Jets cornerback Darrelle Revis (over and over and over) that he thought a penalty should have been called on the Jets star on a key play Revis made in the previous Sunday's game.

Revis initially took the opinion in stride, countering that he felt the host was wrong. As Francesa persisted in a half-joking manner Revis sounded agitated. After a few minutes of back-and-forth, an electronic tone could be heard on the line and Winley's voice came on the air to tell Revis to hang up the phone, which the cornerback did.

To his credit, Winley later called the show's producer to apologize and say he should have asked the host to simply move on to a new topic:


In my judgment, given the tone of the interview, I should have asked Mike to move on to another topic, instead of instructing Darrelle to hang up the phone. That was an error on my part. Ive called Mikes producer and I apologized.

Did Winley cross the line? [Listen to the exchange here] Criticism has been directed at all sides in the wake of the incident, from those who are suprised a PR staffer was on the call at all, to those who think the host was to blame.

I thought Francesa was baiting the star player into a reaction like he got. The story was all over the New York press, even after the Jets scored a resounding win over the San Diego Chargers on Sunday, so it was a shrewd PR play by the veteran radio man.

But Revis took the bait and Winley had to know his intervention would not be viewed kindly.