New York counselor Richard Torrenzano and former White House speechwriter Mark Davis have authored "Digital Assassination," warning people and companies about attacks on websites, some of them un-moderated, that can destroy reputations and businesses. 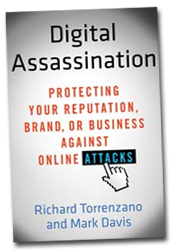 The book was published today by St. Martins Press at $25.99 and is available in hardcopy at Amazon and also via Kindle.

Companies and people are being hit with false Wikipedia entries, false and malicious entries on un-moderated websites such as yelp.com, obscene fake images, and misuse of material on Facebook, say the authors.

The web has effectively brought an end to privacy and individuals and companies must start fighting back, they advise.

Objects of stealth attacks may not even know whats being said about them in various web venues, they point out in a chapter headed, Silent Slashers.

Gossip-oriented websites have pushed aside traditional media and do anything but balanced reporting, they say.

Other hazards are Evil Clones in which a victims name and image are used for confessions to something terrible; Jihad by Proxy, in which moneyed interests engage in motive laundering in order to launch attacks; Truth Remix, in which a bad fact is spun into something far worse, and Clandestine Combat, where competitors or enemies easily rob secrets of a victim.

Current and past headline stories are used to illustrate the authors points. They show what victims of DA can do to minimize, neutralize and defeat the attacks.


Torrenzano Was at NYSE

Torrenzano, whose firm handles strategic communications and "high-stakes" issues management, was a member of the New York Stock Exchanges Management and Executive Committees for nearly a decade.

Davis, a speechwriter for President George H.W. Bush from 1989-91, has been with the White House Writers Group, D.C., comprised of former Presidential speech writers, since 1996.

Pre-publication reviews include a comment from General Michael Hayden, former Director of the Central Intelligence Agency and longtime head of the National Security Agency.

Torrenzano and Davis blend a compelling narrative, killer anecdotes and page-turning prose into a sober account of what happens when the darker side of human nature harnesses the connectedness and anonymity of todays web, he said.

Dick Grasso, former chairman/CEO of the New York Stock Exchange, said the book provides a road map for navigating the potholes, pitfalls and landmines of our new digital world, a must read for every CEO and top executive.

Charlene Li, author of Groundswell and Open Leadership, said those with a good reputation should read DA to protect themselves from irreparable harm via the web.