McDonald's and its longtime PR agency GolinHarris are again working to carefully stoke the odd cult of sandwich that is the McRib, which re-emerged on Monday for two weeks to throngs of salivating fans. 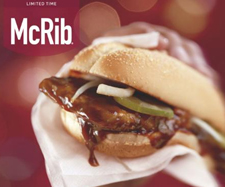 The addictive pork patty offering, a certifiable PR dynamo, is scheduled to hit McDonald's menus for a limited engagement for the second time in two years, creating a buzz by legions of fans who were devastated when the fast food giant pulled the plug in 2005.

The sandwich has been a quirky PR juggernaut for McDonald's, which gave the McRib a "farewell tour" in 2005 after sales lagged in the years following its introduction in 1982.

Paying personal homage to the McRib during last year's limited engagement, Ogilvy PR's Blake Bowyer gave props to McDonald's for its PR handling of the phenomenon:

"Its not a hamburger, its not for everyone, and, heck, some people dont even think its pork. No matter, because McDonalds embraces an inadvertently crowdsourced mythos of the sandwich that grows every time it returns to the menu. While many products arent received with such foolhardy affection, the key is authenticity and it is fundamental to the survival of any product or service online."

This year's roll-out with GolinHarris includes a digital game via the McDonald's Facebook page, but the company seems careful not to step on the grassroots publicity generated by the ephemeral sandwich which Eater.com last year dubbed the "random meat comet." It even embraces the fan-built McRib Locator, built by a Minnesota meteorologist and given a robust piece in the Wall Street Journal last year.

U.S. marketing director Marta Fearon even contributed to the Mcrib's, er, mystique with this quote from a release on Monday: "At this time, we can't speculate on its return in the future but we hope McRib fans will enjoy it now while it lasts."