Long-time National Public Radio host Michele Norris is stepping down from her post because her lobbyist husband, Broderick Johnson, is joining the Obama campaign team. The All Things Considered co-host expects to return to her perch after the election a little more from a year from now. [Full disclosure: I am a fan of both Norris and ATC.] 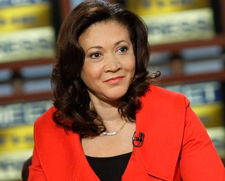 In another move, NPR said it will no longer distribute the World of Opera program that is aired on more than 60 stations because its host, Lisa Simeone, served as a spokesperson for Occupy Washington.

Norris and Simeone provide fresh meat to conservatives who dismiss NPR as a hotbed of all things liberal. The networks reaction to both disclosures puzzles.

NPR threw Simeone, a 25-year radio veteran, under the bus. But as a freelancer, Simeone isnt covered by the networks code of ethics that bans journalists from participating in marches and rallies that involve issues that NPR covers.

After NPR pulls the plug on WoO on Nov. 11, Simeone will remain as its program host. Thats because Davidson, N.C.-based WDAV, producer of the program, says Simeones involvement with Occupy Washington has nothing to do with productions from La Scale, Bayreuth, Vienna, Paris and Geneva as well as performances from the New York City Opera, Santa Fe Opera, Houston Opera and Washington Grand Opera.

WDAV will assume distribution duties after NPR bails out. Bravo for WDAV. Boo for NPR, which caved to any potential criticism from the right.

And speaking on double standards, Norris, in a memo posted on NPRs site, said it would be difficult to continue the hosting slot. Given the nature of Broderick's position with the campaign and the impact that it will most certainly have on our family life, I will temporarily step away from my hosting duties until after the 2012 elections, she wrote. She will keep busy at NPR producing segments and reporting on non-election related pieces. That seems a big stretch because in todays super-heated political environment nearly every PA piece produced by NPR is bound to have some tie to the Obama re-election effort. NPR should have given Norris a sabbatical until the election is over. NPR is inconsistent in ditching non-employee Simeone and keeping Norris.

While Norris is getting media attention, the spotlight should be trained on her hubby. He is not going to be just manning phone banks for Obama. Jim Messina, Obamas campaign manager, called Johnson an invaluable advisor.

As the No. 2 African-American (after Obama) on the re-election team, Johnson is bound to get a lot of visibility. More importantly, Johnson is a former lobbyist at Bryan Cave for TransCanada, which wants to build the Keystone pipeline to carry dirty oil from Canadian shale across our fair land and over drinking water supplies to the Gulf Coast so it can be refined and shipped to China.

The decision on whether to approve or kill the pipeline is in the hands of the president. Its his biggest pre-election environmental decision. TransCanada is sure lucky to have its former lobbyist on Team Obama. Johnson officially de-registered as TransCanadas lobbyist in April.

He also worked as in-house lobbyist for AT&T, which is desperately trying to salvage its $39B T-Mobile acquisition.