Now that a decade has passed since the destruction of the World Trade Center, Deerfield, Ill.-based Walgreens has apparently decided its okay to cash in on 9/11.

While walking down the aisle of a Brooklyn Walgreens on Tuesday night, this blogger was floored by a display of sugar-free peppermint tins of 9/11 mints. So floored, I returned with a camera to take pictures of the display. 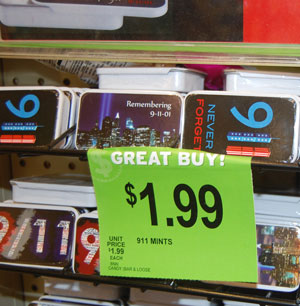 The tins feature the Never Forget, Remembering our Fallen Heroes and Remembering 9/11 slogans. Theres an image on the tin of the tribute of light that rises each anniversary of the terror attack.

A Walgreens display sign calls the mints a great buy at $1.99. A portion of the proceeds of the mint sales is promised to the 9/11 memorial in New York City, which seemed a little redundant since Brooklyn is part of that city.

The 9/11 candies are the ultimate schlock item.

Webb Candy of Rosemount, Ill., which specializes in impulse buys and commemorative tins to celebrate weddings, anniversaries, graduations, proms and new babies, has seriously branched out with the 9/11 products. The candies are made here. The tins are produced in China.

A Rosemount staffer told me that at least 10 percent and up to 15 percent of the sales proceeds will go to the 9/11 memorial. Thats the typical arrangement the company has with customers. He did not know the total amount so far that has been collected for the memorial.

If the Brooklyn store is a proper sales gauge, the donation wont amount to much. A clerk said sales of the 9/11 mints are pretty slow.

Webb Candy is an insignificant player on the national stage. But does the image of a national chain like Walgreens benefit from being associated with such tackiness? I dont think so.

If the display serves any good purpose at all, it is to remind people to donate directly to the 9/11 memorial. Also, if you have a hankering for some mints, pick up a container of Tic Tacs.