The former Massachusetts governor better hope a picture really isnt worth a thousand words. If Confucius nailed it, Romney is toast. 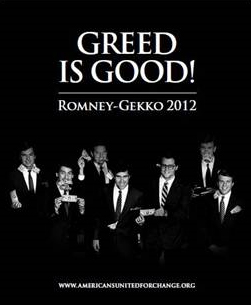 The gang of Occupied Wall Street also may join the fun. As faux Romney supporters, they will rally outside the site of the fund-raiser with posters featuring a photo of Romney clowning around with fellow founding members of Bain Capital. In 1984, those guys thought it a hoot to pose with their mouths and pockets stuffed with cash. Boy, how times have changed?

The mock campaign posters offer support for the Romney-Gekko ticket and feature the Greed is Good slogan made famous by the fictional Gordon Gekko in Oliver Stones Wall Street film classic of the 1980s.

According to the media advisory, the campaigners will tell how Romneys Bain Capital raked in obscene profits as five of the companies under his firms direction went bankrupt and thousands of workers were laid off. The groups promise great visuals to drive home Romneys position as poster boy for Wall Street and the one percent.

The demonstration has the potential to throw Mr. Steady in the Polls for a loop. His past Master of the Universe image stands in sharp contrast to the anti-Wall Street mantra shared by the Tea Party, Occupied and a majority of the U.S. population.

The big question: who will be the next front-runner in the GOP race after the fall of former poll leaders Rick Perry, Herm and Mitt. I bet on the Newt.

At the moment, Texas Congressman Ron Paul is Gingrichs only competitor for the top of the GOP heap spot. This blogger is a big fan of the crusty and very entertaining iconoclast of the Lone Star State. The reality: Paul has a zero shot of becoming president.

Neither does the Newtster.