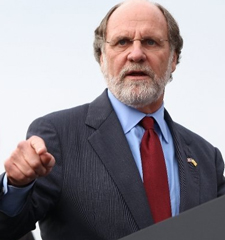 The statement lacks the usual boilerplate, expressing even a bit of gratitude to Corzine for his two and half years of service. Instead, MFG notes: Mr. Corzine has confirmed that he will not seek severance payments in connection with his resignation.

In out-of-control Wall Street, Corzine is entitled to a haul of more than $12M for his role in engineering the collapse of the biggest financial firm since Lehman Brothers went belly-up in 2008. Occupied Wall Street has a new poster boy.

Corzine put out his own statement, running a slightly meatier three paragraphs. It's an attempt to take the high road. Corzine made a difficult decision, but one that I believe is best for the firm and its stakeholders. What would be even better for MFG stakeholders? How about tracking down the $630M in missing funds?

[Corzine could have followed the lead of O.J. Simpson, who -- after he beat the murder rap -- vowed to track down the killer of his wife Nicole. Presumably, that hunt will resume in 2017 when O.J. is eligible for parole on his robbery conviction. The Juice presides in Nevada's Lovelock Correctional Center.]

The 64-year-old financier feels sadness for what has transpired at MFG. The reality: nobody cares about Jons tender feelings. He should have taken responsibility for the mess that MF Global finds itself it. Corzine intends to continue to assist the company and its board in their efforts to respond to regulatory inquiries and issues related to the disposition of the firms assets. My guess is that MFGs lead director Edward Goldberg and COO Bradley Abelow aren't going to be knocking on Jons door looking for nuggets of wisdom.

The New York Times reported today that Corzine has hired Andrew Levander, a top criminal defense lawyer. He represented the gang of independent directors at Lehman and Merrill Lynchs CEO John Thain during the great financial collapse of 2008. The more things change

Corzine has not been charged with any wrongdoing. There is one thing certain. He is not going to serve time in the slammer any time soon. That doesnt happen to the one percenters on Wall Street.

Jail is only for suckers like those camped out at Zucchotti Park.