Singer Justin Bieber is using New York crisis pro Matthew Hiltzik to handle charges that he fathered a child in the aftermath of a quickie following a concert last October in Los Angeles. 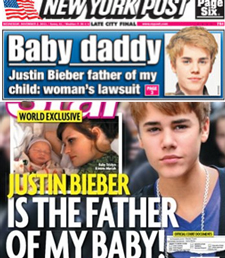 The woman, Mariah Yeater, filed a paternity suit against Bieber earlier this week, seeking child support and reimbursement for expenses connected with her child.

Bieber denied Yeater's allegations this morning during an appearance on The Today Show. He said his celebrity makes him as "target, but I'm never going to be a victim."

Hiltzik said in a statement "it's sad that someone would fabricate malicious, defamatory and demonstrably false claims. We will vigorously pursue all available legal remedies to defend and protect Justin against these allegations on behalf of Justin Bieber."

Hiltzik made his mark in Democratic politics, working on campaigns for New York's Chuck Schumer, Eliot Spitzer and Hillary Clinton. He entered the PR world as corporate communications chief at Miramax and personal spokesman for Harvey Weinstein.

After opening a New York outpost for Britain's Freud Communications, he established Hiltzik Strategies in 2008.