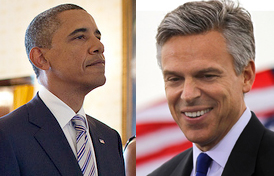 Nate Silver, the Times statistics wiz who wrote the article, believes the only Republican candidate to beat Obama hands down -- no matter what the economic climate may be on next Election Day -- is the guy who has no chance of winning the Republican nomination. Thats Jon Huntsman, the former Utah governor and Obamas ambassador to China. He's viewed as way too moderate for the hard-core GOP primary voters.

With sluggish growth, Obama has a 27 percent chance of beating Huntsman. That rises to 45 percent with an economic uptick. Huntsman aces Obama in each category. With an improving economy, the president beats Romney (60 percent).

Texas governor Rick Perry and currently embattled Herman Cain only beat Obama if the economic chips are down, according to Silver. Michele Bachmann has no chance of beating the president. Even with no-growth, the president has a 66 percent chance of whipping the Minnesota congresswoman. That rises to 95 percent with an economy growing at a healthy four percent clip.

Silver says Huntsman stacks up as a nightmare opponent for Obama. Tellingly, Messina, in his campaign blog criticizing Silver's use of a "mathematical formula" to decide the winner of the race, makes no mention of Huntsman. Romney, Cain, Perry and Bachmann are rapped for supporting Tea Party policies that "give special treatment to millionaires and billionaires while asking seniors and minority families to pay for it." Tea Partiers despise Huntsman.

Huntsman is counting on winning or placing a close second to Romney in the New Hampshire primary slated for Jan. 10. He believes a strong showing in the Granite State would be a springboard to other primary wins. If Huntsman doesnt do well in N.H., hes out of the race, removing the top obstacle to a second term for the president.