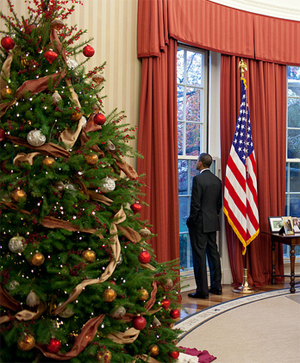 Japans Olympus Corp. is embroiled in a huge financial scandal connected to the cover-up of investment losses of more than $1B stemming from the 1990s.

The Government of Italy collapses under a mountain of debt, threatening the future of the euro zone.

And The Obama administration announces a stealth tax on Christmas trees in the never-ending war on you know what. How Scrooge-like!

The tone-deaf-to-PR Agriculture Dept. handed the anti-Obama crowd an early Christmas gift yesterday with what is being called a Christmas tree tax. Genius David Shipman, acting administrator of agricultural marketing, announced a 15 cent fee on trees sold to fund the newly formed Christmas Tree Promotion Board. That bodys mission is to run a program of promotion, research, evaluation and information designed to strengthen the Christmas tree industrys position in the market vis-à-vis its fake tree competition.

The new fee brought squeals of delight from Obama critics such as former Dick Cheney aide David Addington who posted: Obama Couldnt Wait: His New Christmas Tree Tax on the Heritage Foundations blog. He wrote: The economy is barely growing and nine percent of the American people have no jobs. Is a new tax on Christmas trees the best President Obama can do?

On Michelle Malkins blog, Doug Powers noted that when he first heard the federal government was getting involved with the Christmas tree industry he first assumed Uncle Sam was trying to remove the name Christmas from the name. If tree sales dont pick up, Powers predicts the introduction of a cash for artificial tree clunkers program for next Christmas to get the fake trees off the streets.

The Christmas tree tempest in a teapot is a self-inflicted wound. The Ag Dept.s chose a lousy time, the onset of the holiday season, to unveil formation of the board that was first requested by the industry in 2009. The announcement should have been buried in the summer doldrums when thoughts of Christmas were far off the radar.

The tree check-off scheme is similar to 18 other commodity programs already in place. I dont remember much squawking about the "Got Milk?" or "Beef, Its Whats for Dinner" marketing efforts. The fee is limited to sellers of more than 500 trees, not exactly the volume done by the guys from Quebec, who sell trees each year in my Brooklyn neighborhood.

The National Christmas Tree Assoc., which supports the check-off, says growers, not buyers, are going to pay the 15 cent charge. The reality: a 15 cent fee on a tree that may cost $200 in high-rent districts like New York City is chump change, but a great weapon to smack the Obama administration.

Note to the Ag Dept., if there's a plan to increase the egg check-off fee, dont wait until the Easter season to announce it. Get the news out now.

Mercifully, the White House announced today that the fee has been put on hold and the Ag Dept. will revisit the issue. Nice work.