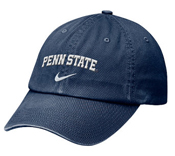 Erin Dobson, senior manager of global public affairs for Nike, told The Oregonian that the sports apparel giant has no plans to change the (unfortunate) name of the day care facility at its Beaverton headquarters -- the Joe Paterno Center.

Dobson, who said Nike is "deeply disturbed by the claims brought forth in the indictments," said the company's relationship with Penn St. "remains unchanged" amid the child sex scandal that has rocked the university and toppled football coach Joe Paterno and president Graham

The Oregonian noted Nike's president and CEO, Mark Parker, is a 1977 graduate of Penn State.