Rear Admiral Vic Beck, vice chief of information of the U.S. Navy, told the Memphis chapter of PRSA yesterday that good PR involves listening to and engaging members, changing campaigns when needed, and being innovative. 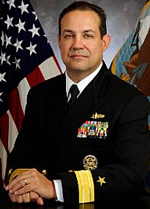 His speech was covered by the Commercial Appeal, which quoted him as saying, Not every team member will have the same commitment. Not every one of them will eat, sleep and breathe your organization.

Beck, according to the Commercial Appeal, analyzed what his team members were doing and why before deciding the most effective way to send out messages.

From Sept. 2008 to September 2010 he was VP, communications planning and Strategy, S4 Inc., Burlington, Mass., a firm that serves U.S. government Dept. of Defense, Dept. of Homeland Security and private entities.

Beck, who has been with the military 26 years, serving on active duty from 1985-92 including five years on the USS Enterprise and USS Richard Byrd, led the international military coalitions PA effort in Afghanistan from November, 2010 to September 2011 and was chief of media operations for the multinational force in Baghdad from August 2007 to April 2008.

Beck was a speaker at the 2011 conference of the PR Society in Orlando. His topic was, Align messaging across a large enterprise. Learn proven communication team leadership strategies and techniques that have been battlefield tested.

Beck has been asked via e-mail and phone messages if he approves of the PR Societys formal boycott of the ODwyer Co., whose employees and assigns were banned from the Assembly, the exhibit hall, all general sessions, the press room, and the opening night reception of the conference.

Attempts to reach him for the past week have been unsuccessful.