Edelman offered hope to PR people who view Twitter as an out-of-control communications mess populated by millions of self-important microbloggers driven to give the world minute-by-minute details of whats happening in their humdrum existence. Or as a Top Five PR firm executive told me, "Who cares what I am doing today, tomorrow or the next day for that matter?" [Full disclosure: I tweet.] 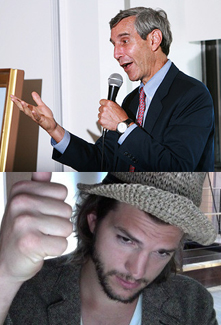 Edelman told the Institute of PR on Nov. 10 that a mere handful  okay, 25,000  people generates half of the worlds tweets. Thats a powerful statement and pure gold to PR pros. The CEO of the biggest independent firm described the top influencers as passionate, fast, and prolific, which makes their expertise and personal experience resonate globally.

On the flip side, theres a lot of chaff beyond that circle of Twitter influence. Its PR role to separate the tweet wheat from chaff.

The dark side of Twitter played out in the glorious media slap-down of Twitter master Ashton Kutcher. Due to a single unfortunate tweet, the 33-year-old actor got embroiled in the Joe Paterno/Penn State sex abuse scandal.

To his 8.3M followers, Kutcher on Nov. 9 appeared to be defending Paterno with a How do you fire JoPa? #insult #noclass as a hawkeye fan I find it in poor taste? tweet. Yikes! That tweet triggered a firestorm in the mainstream media that quickly had Kutcher confessing that he didnt have all of the info on the Penn State mess when he launched the ill-fated tweet into the tweet-o-sphere. Kutcher violated Twitter Rule No. 1, which is to have all the facts pre-tweet.

The actor moved to regain his footing by apologizing and vowing to turn his Twitter feed over to his production company, Katalyst Media.

Kutcher will apparently continue to tweet, but KM is to serve as a secondary editorial measure.