The last few years have seen a handful of PR case studies emerge as institutions of higher education were embroiled in scandal, tragedy and general bad behavior.

The school was lambasted for its failure to react swiftly and communicate the danger as the ordeal unfolded, including a two-hour meeting of school officials while the killer remained at large.

Response: Burson-Marsteller was hired to help with the crisis, which later spawned implementation of campus-wide alert systems throughout the country's institutions of higher learning. 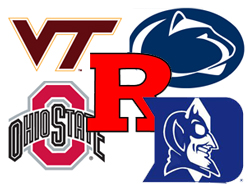 Response: While Paterno has used PR counsel and the crisis is still playing out, but Penn State is now relying on Ketchum for outside PR advice. Student outrage (and rioting) over the media treatment of the school and Paterno was a national joke, but the emergence of US Steel CEO John Surma as the school's crisis voice has drawn accolades.

3. Duke University Lacrosse Scandal - The North Carolina campus suffered a reputation blow in 2006 when members of its lacrosse team were accused of raping a woman they hired as a stripper for a party. Although the case eventually fell apart and the athletes were cleared, the contrast of the alleged victim and many media outlets' portrayal of Duke athletes as priviledged youth hurt the institutions image as the incident became, in the words of O'Dwyer columnist Richard Nicolazzo, a "Molotov cocktail of race, class, alcohol, sports, elitism and town-gown relations."

4. Ohio State University Tattoo-Gate - The midwest football powerhouse was hobbled amid a memorabilia-for-cash scandal in mid-2011 involving a local tattoo parlor which led to the suspension and later toppling of its revered head coach Jim Tressel.

Response: The school chalked up an $800K crisis response bill, including nearly $300K with Kekst and Company for PR counsel.

5. Rutgers University and Don Imus - The New Jersey institution's women's basketball team was on a dominating run led by coach C. Vivian Stringer in 2007 when Don Imus called the squad "nappy-headed hos," a remark which led to his firing after a ham-handed attempt to explain the inexcusable quip.

Response: While Imus has been exiled from mainstream radio, Stringer and Rutgers handled the situation with PR aplomb, showing grace and dignity in a situation where the coach and students had every reason to be angry. As the NY Daily News noted: "The defining image was of the Rutgers team at a press conference, exuding everything Stringer had tried to instill. The 'respect' message couldn't have come across more clearly if Aretha Franklin had dropped in to sing."