Benetton, which saw a big dip in its latest earnings, picked up some instant and priceless PR today when it decided to kill an image of Pope Benedict XIV kissing a top Egyptian imam Ahmed el Tayyeb as part of its just announced unhate campaign. 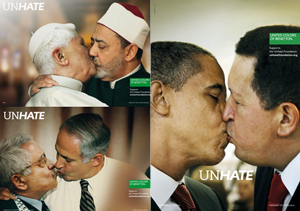 The Vatican immediately bashed the ad as a completely unacceptable use of the image of the Holy Father and a grave lack of respect for the pope. Benetton agreed to shelve the image.

The timing of the kissing religious couple trivialized the plight of Coptic Christians in Egypt, who are under attack by the majority Sunni Islamic population. Benedict had strongly condemned the attack on a Coptic church in Alexandria.

In yanking the ad, Benetton said it is sorry for the use of the image that had so hurt the sensibilities of the faithful. One should take that expression of remorse with a big grain of salt. Benetton has a history of over-the-top advertising. It got the reaction that it expected and capitalized on the PR.

The company also pulled an ad featuring German chancellor Angela Merkel and Italys Silvio Berlusconi that was prepared before the Italian decided to step down.

Alexessandro Benetton described the ads as constructive provocation aimed to give widespread visibility to an ideal notion of tolerance.

Look for the ads in upcoming issues of The Economist, New York Magazine and Newsweek because they might not be around for long.