Stuart Elliotts ad column in the New York Times yesterday had the headline Redefining PR in the Age of Social Media and described PR Society of Americas quest for a new definition of PR. 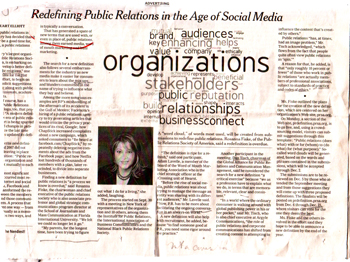 Society chair Rosanna Fiske is quoted as saying, My parents, for the longest time, have been trying to figure out what I do for a living. Elliott noted that Fiske laughed on making that remark.

Fiskes father, according to her biography, is a famous journalist photographer who traveled the world taking pictures of heads of state and other notables. His journalism was the inspiration for her going into PR, she has written. Her father, whom she refuses to identify, cannot be proud of what has gone on this year under Fiskes leadership.

She and COO Bill Murray signed and circulated on Sept. 1 a 23-page list of charges against this reporter topped off by a ban against any ODwyer reporter or assign attending any Society function.

This is the first time in the history of journalism that an organization put a press boycott in writing. It has brought criticism from the National Press Club, PR Watch and a number of individual bloggers.

The stain of this action will long remain with PRS, bloggers are saying.

By banning ODwyer, the Society has lost credibility as an organization that can effectively speak for its members, blogged Ed Lallo, former director of the PRS and IABC boards in Austin.


All Reporters Banned from Assembly

Not only was I banned from covering the Society's Assembly this year (for the first time in 40 years), but so were all reporters. There was no press coverage at all of the Assembly.

VP-PR Arthur Yann posted in a LinkedIn group that the Society is a private member organization and our national Leadership Assembly is a private meeting of our members. Were well within our rights to ban any and all reporters from attending.

Fiske set a new record for being remote from members, addressing only two chaptersher own Miami chapter and Georgia. That fact has been checked several times with Yann who does not dispute it.

She led a drive to boost dues $30 to $255 without ever facing any chapter membership on this issue.

When a delegate asked her on a teleconference about the high pay of h.q. staffers, she then put all succeeding teleconferences on a listen-only mode, blocking any conversations (although the NYT column says that what PR does these days is take part in conversations with consumers via LinkedIn, Facebook, the web, etc.).

Fiske was on the 2006 board that blocked any web or print mention of the Central Michigan chapter's attempt to bring Society governance into line with that of the America Bar Assn. and American Medical Assn. [And also in line with Roberts Rules, which supposedly govern the Assembly. RR says that if a group has an assembly that body tells the board what to do (pages 6-7 and 549 of RR). Such is not the case at the Society.]

Central Michigan's extensive proposal, with proper legal language, was made in April 2006 but never won a mention in Tactics, print or online.

Ignored last year until a story was put on an inside page of Tactics in September was the quest of the Committee for a Democratic PRSA for the right of non-APRs, who make up 80%+ of the membership, to run for the board (a right denied to them since the mid-1970s).

Society leadership that included Fiske refused to let the Committee e-mail the 21,000 members although staff sends e-mails every day to that membership (except opt-outs).

Members are not allowed access to the national list of Assembly delegates, do not know what is said in the Assembly (unless they attend in person), and do not know how delegates vote.

Twenty abusive governance and communications practices were described in a blog Sept. 12, 2011.

PRs basic mission was described in 1906 by Ivy Lee who promised his press bureau would answer all questions most cheerfully.

From the point of view of anyone seeking information from an organization, whether they are reporters or bloggers, what they look for from PR people is answers to their questions.

The mechanics of how those questions are presented and answered is a side issue.

PRs mission is bringing truth to an audience and truth in a democracy is determined by vigorous public debate  in person. The courtroom process involves cross-examination of witnesses where facial expressions, body language and other clues can be gauged.


Journalists Should be on Committee

Absent from the list of sources sought for the new definition of PR is anyone from the press.

We have e-mailed a dozen journalist groups and schools details of the Society boycott against us and asked them to look into this.

They should also add their input on how PR pros should perform. PR pros have their hands on a lot of information levers and often control access to CEOs and other news sources.

Three journalist figures stand outSandra Mims Rowe, chair of the Committee to Protect Journalists and chair of the Pulitzer Prize Board in 2002-03; T. Barton Carter, chair of the Dept. of Mass Communication, Boston University, and Tom Rosenstiel, director of Pews Project for Excellence in Journalism and vice chair, Committee of Concerned Journalists.

Rowe was editor of The Oregonian from 1993-2010 during which time it won five Pulitzers including the Gold Medal for Public Service.

There could not be a more interesting time to probe the ethical principles of journalism than today, in the midst of this communications revolution that affects all aspects of our culture, Rowe said in the release announcing her new post. She was on the Pulitzer board from 1994-2003.

She described the Cronkite School as an ideal place to engage the critical questions, decisions and principles of journalists.

Rosenstiel, who has a dual role in journalism leadership as director of Pews Project for Excellence in Journalism and vice chair, Committee of Concerned Journalists, was a practicing journalist for 20+ years, serving as media critic of the Los Angeles Times and chief congressional correspondent of Newsweek.

He is the author with Bill Kovach of The Elements of Journalism: What Newspeople Should Know and the Public Should Expect. He is the winner of the Goldsmith Book Prize from Harvard University, the Society of Professional Journalists Sigma Delta Chi awards for research in journalism, and the Bart Richards Award for Media Criticism from Pennsylvania State.

A former media critic for MSNBCs The News with Brian Williams, he is a frequent commentator on radio and TV programs.