Forget "Black Friday." Which national retailer will be the first to buck American tradition by opening for business on Thanksgiving Day? They are getting mighty close. Even better: What chain will add another shopping day to the Christmas buying season by introducing Black Wednesday bargains the day before Thanksgiving? 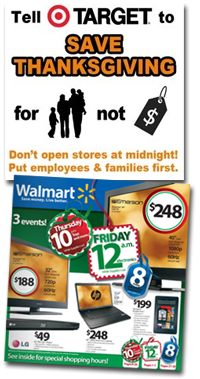 That move would pay tribute to Franklin Roosevelt who caved to big retailers in 1939 and moved Thanksgiving up a week to boost sales during the Great Depression. The Roosevelt White House received truckloads of letters panning the Thanksgiving shift. Half the states ignored the presidential proclamation. In 1941, Congress restored Thanksgiving to the traditional last Thursday of November.

Do Americans today have the same emotional ties to Thanksgiving that their parents/grandparents had? No way. There's more buzz this week about the impending Green Bay Packers showdown with the Detroit Lions than the celebration of the Pilgrims.

My bet is that Wal-Mart will lead the way to an all-day Thanksgiving Day opening. The chain will open at 10 p.m. this Thursday, featuring a rolling schedule of special deals slated for 10 p.m., midnight and 8 a.m. Friday. Thats a good crowd-control measure for the Bentonville behemoth, which has had its reputation scarred in the past by stampedes of door-buster bargain maniacs.

Target is pushing its traditional 5 a.m. Black Friday opening up to midnight Thanksgiving to help customers with hectic schedules and tight budgets. Thats bunk. With visions of dollar signs dancing in its corporate head, the discount retailer doesnt want to fall further behind Wal-Mart.

Target does face pushback among employees and customers who posted a petition at change.org to protest the move to midnight. Nearly 200K people have signed the petition that reads:

A midnight opening robs the hourly and in-store salary workers of time off with their families on Thanksgiving Day. By opening the doors at midnight Target is requiring team members to be in the store by 11 p.m. on Thanksgiving Day. A full holiday with family is not just for the elite of this nation, all Americans should be able to break bread with loved ones and get a good nights rest on Thanksgiving!

My advice to Target workers is to root for the underdog Lions, schedule an early feast and go easy on the stuffing.

Happy Thanksgiving to all!