The Federal Reserve Board has a lot of moxie, believing PR is the golden ticket to earn the trust of Americans. The Wall Street Journal reported today that Fed chairman Ben Bernanke believes people will rally around the Fed once the public truly understands the genius behind the monetary policy that he believes prevented the collapse of the worldwide economic system. 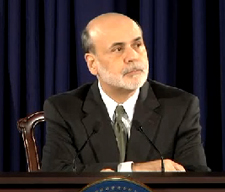 Bernanke thinks a bold communications plan will be the game changer. To be ironed out at the Feds Dec. 13 meeting, the new plan is to spell out goals and plans for interest rates and plans to foster economic growth. The case for PR sounds like damage control.

The $7.7T bombshell that Bloomberg Markets dropped on Bernanke last week sums up why the Fed is held in special disdain by Tea Partiers, Occupy Wall Streeters and nearly everybody in between.

Via the Feds discount window, Bernanke secretly laundered $7.7T in no-interest loans through the banks from 2007 to 2009 to keep them afloat. Making a sucker out of Uncle Sam, the banks then loaned that money to customers and collected a cool $13B.

The Fed never disclosed the $7.7T windfall to Congress as it mulled the $770B Troubled Asset Relief Program. Had Congress known about the $7.7T booty bestowed on banks, TARP would have been a dead duck.

Bloomberg got the goods on Bernanke and his crew after it won a court case forcing the release of 21,000 Fed transactions with banks. It notes gems such as former Bank of America CEO Ken Lewis telling shareholders on Nov. 26, 2008, that his bank was one of the strongest and most stable major banks in the world. He left out the part of being on the hook for $86B that day to the Fed.

The Fed should emphasize transparency and openness before it thinks about PR.