The entertainment value of the Republican presidential campaign, which received a jolt with the unfortunate exit of lively Herm Cain, got back on track today after PR maestro Donald Trump, who is angry that candidates are ducking his Newsmax debate slated for December 27, threatened to run as an independent. Thank you, Donald. 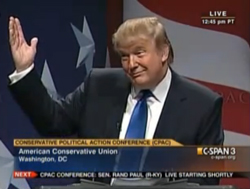 Trump told Don Imus that hes keeping his options open for a White House run, a campaign that could be launched after the May 16 finale of Celebrity Apprentice. He will take the plunge if he doesn't like the then leading GOP contender.

At this point, The Donald likes only Newt Gingrich and Rick Santorum, the only two who have agreed to the debate moderated by Trump. The real estate developer chided the Republican candidates for being too nervous to do the debate. He cant foresee this faint-hearted bunch of candidates going head-to-head with tough Chinese negotiators.

Trump is especially upset with Michele Bachmann, who met with him four times for advice and suggested that he would be a good running mate.

In a fit of pique, Trump may decide to kill the debate and order his people to make plans to gild the White House.

Santorum took advantage of the rare PR gift that fell his way due to the no-show debaters. He issued a statement that read:


Many of my opponents jockeyed to be the first to fly up to New York and use Donald Trump for a photo op and no doubt try and secure an endorsement. But when Donald wants to moderate a debate  they refuse to attend. Thats whats so wrong with politics today  hypocrisy. At this critical time in our nations history, just weeks before Iowans cast this important vote  many of the other candidates want to hide behind TV ads and mail pieces. We plan to be there front and center in person to debate Newt directly, and if its just the two of us, were fine with it.

A Trump debate featuring all the candidates would have been a grand spectacle and the most-watched of the already very entertaining debate series. No-shot Republican candidates like Ron Paul, whom President Obama prays will decide to run as an independent spoiler, are foolish to skip such a high-profile event.