Best Buys new Game On, Santa holiday commercials have been making some shoppers see red. The campaign, created for the electronics company by Crispin Porter + Bogusky, features women waiting up for Santa on Christmas Eve to rudely let him know that because they went to Best Buy, they have no need for his inferior presents.

Drew Panayiotou, Best Buys senior VP-U.S. marketing, told Advertising Age that the creative idea behind the commercials was making Mom feel victorious by letting her take pleasure in being the chief gift giver. 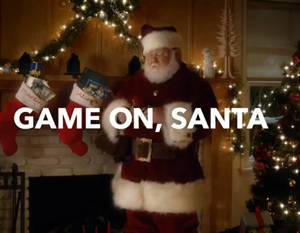 In one spot, a woman smugly tells Santa, guess I didnt leave any room for you, when he comes across her childrens fully-filled stockings. She suggests he fill her dogs stocking instead. In another, a woman mocks Santas gift for her husband Daddy dont want no cologne and shows off the flat-screen TV that she bought instead.

In another, a woman eats the cookies left for Santa right in front of him, gulping down the milk with a smirk on her face. In perhaps the worst of the series, a woman actually meets Santa on the roof, mocks his Ho Ho Ho and then threateningly kicks a Santa decoration off the roof to the ground below.

Panayiotou said the success of the campaign would depend on whether the women in the ads were having fun with Santa or beating up on Santa but many viewers think the ads go a bit too far. The women in the commercials cross the line from playfully razzing Santa to full-on snark.

Im sorry you find our commercials offensive. That was never our intention. I will pass your comments along to our marketing department and ad agency. Thank you for letting us know our thoughts.

Some viewers have complained that Santa is portrayed as pathetic and obsolete. Who needs Santas second-rate gifts when its so easy to one-up him just by going to Best Buy? Others have questioned what message Best Buy is actually sending to children about greed and gratitude. If Santa represents generosity and charity  he delivers presents to good and needy children in exchange for nothing more than cookies  what purpose does it serve to make him look bad?

Best Buy may have hoped that these commercials would remind viewers how low their prices are, but instead the campaign seems to suggest that its okay to be ungrateful for presents that just arent good enough. In this difficult economic climate that isnt just tacky but downright thoughtless.