A self-proclaimed towering intellectual like Newt Gingrich should know better than to play us all for suckers. For as the saying goes, "If it walks like a duck, quacks like a duck and looks like a duck, it must be a duck." 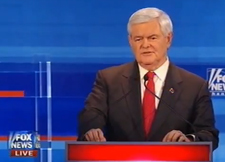 In Newts case, if a guy collects $1.8M from mortgage banker Freddie Mac prior to its collapse for providing both strategic counsel and history lessons and does work for the Center for Health Transformation on behalf of Big Phama, he isin the publics eyea lobbyist.

Howard Marlowe, chief of the American League of Lobbyists, says technically Newt isnt a lobbyist because he didnt spend 20 percent of his time on lobbying activity. He's right. The former Speaker of the House took advantage of what Marlowe deems the Gingrich Exception. That Exception, Marlowe told Politico, must be shut down. To the lobbyists lobbyist, Gingrich is an example of what feeds the publics cynicism about the lobbying profession.

Ron Paul, a smart guy who will never become president, did America a great public service by zeroing in on Gingrichs lobbying activity. The Texas Congressmans Selling Access ad portrays Gingrich as a master of influence peddling. During last weeks debate, Paul rapped Gingrichs lobbying activity. The Speakers defense about providing only strategic advice drew nothing but laughter from the audience.

Pauls lobbying attacks on Gingrich have propelled the Texan to the top of the latest GOP presidential poll in Iowa. At the moment, Newt is No. 3 behind Mitt Romney, another guy with issues when it comes to his work in the private sector.

On lobbying, idea man Newt is way too slippery for his own good. Potential Republican primary voters have apparently forgiven Newt for morality issues surrounding his three marriages. He doesnt need any more baggage. Newt should come clean. Lobbying is one of the oldest professions.

What's there to hide, Newt?