Ronn Torossian, CEO of 5W PR, who has been the subject of stories in the New York Times, New York Post and Jewish Daily Forward in the past several days, says that allegations of embezzlement and extortion leveled against him are "absurd" and have "zero truth."

An NYT story Dec. 21 said the U.S. Attorney's office and the FBI are investigating the possible disappearance of millions of dollars donated to Mosdot Shuva Israel, the congregation of Rabbi Yoshiyahu Yosef Pinto.

Torossian said he had not worked for the rabbi in the past year and that he will shortly release more information. Also mentioned in connection with the allegations is Ofer Biton, a former aide to the rabbi. 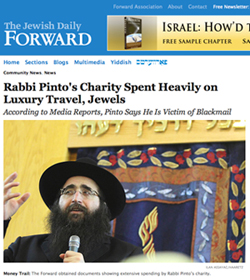 Both NYT and JDF described an expensive lifestyle of Rabbi Pinto that included houses in East Hampton, an apartment in the Jumeirah Essex House on Central Park South, purchases of costly jewelry and clothing and a habit of flying first class.

JDF said it obtained receipts showing purchases by the charity of $110,000 in jewelry from Modolo International on Madison Ave. and $75,211 for a month for two people at the Alvear Palace Hotel, Buenos Aires. Pinto's wife, Deborah Rivka Pinto, was listed on the bill.


Spending "At Odds" with Stated Aims

The pattern of spending by Mosdot Shuva Israel, said JDF, "seems at odds with the organizational objectives it provided to the IRS when applying for its exemption from federal taxes in 2004. At the time, the group said it existed to maintain a synagogue, provide spiritual guidance and promote 'religious, intellectual and moral development,' among other goals."

Said JDF: "Pinto is among the most prominent of a new breed of Israel rabbinic gurus with influence in Israel's business and political spheres. A scion of two prominent Moroccan rabbinic lines, his followers include Nochi Dankner, billionair owner of the Israeli daily newspaper Maariv, and Jacky Ben-Zaken, prominent real estate investor.

Rabbi Pinto's base in New York as at 122 E. 58th st. JDF said it was told that Mosdot Shuva Israel has an annual budget of $5.5 million and
that the network spends $50 to $60 million yearly.