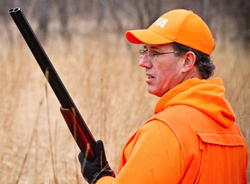 Give me a break! What in the world is wrong with Iowa? Or are Republicans in the Hawkeye State just taking us all for a ride?

During the past year, Republican presidential candidates have pumped millions into Iowa for campaign ads and organization, yet 45 percent of potential GOP Iowan caucus-goers still say they are undecided about whom to back on Jan. 3, says Roger Ailes network.

Geez, what do they want? Do they want Rick to show up on their doorsteps and pledge to take out the trash for a week in return for their support? All they need to do is ask the former Pennsylvania Republican Senator. Hell oblige. Fox is predicting Rick, who lost his Senate seat by more than 17 points to Bob Casey, is now ripe to challenge Ron Paul, Mitt Romney and the quickly sinking Newt Gingrich for the crown in Iowa. And so it goes.

Iowans are milking their every once-in-four-years political season for all that it's worth. The too-close-to-call scenario keeps the cameras rolling and money flowing in until caucus day, after which the state will once again vanish from the nations stage.

I did learn today that Iowa has a chain of Christian pizza and chicken restaurants armed with the vision to glorify God by positively impact the world we live in. Michele Bachmann is a regular. [This blogger has fond memories of Iowa, where he first came upon penny parking meters long ago in Sioux City.]

While the presidential candidates battle it out in Iowa and New Hampshire, Washington Republicans are making their quest for the White House mission impossible.

In the aftermath of the petty, nasty and mean-spirited Republican opposition to extending both the payroll tax cut and unemployment insurance, President Obama now enjoys his highest approval rating since July, 47 percent. Thats a mere digit off the approval level that Gallup believes is a "lock" for re-election.

The president should wish Speaker Boehner and Majority Leader Cantor continued success in the new year.

He owes them big time.