Wikipedia, the free encyclopedia that has 3.8 million subject categories, is begging for contributors to flesh out its scanty, misleading entries on public relations, PR Society of America, Accreditation in PR and the Chicago Tylenol murders.

Its entry on the History of PR is called an orphan since few or no other articles link to it. WP asks readers to supply such links. 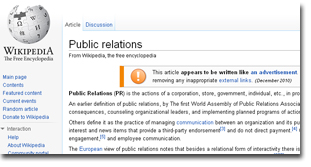 The History of PR, which gives lots of space to Edward Bernays and Ivy Lee, not only has huge gaps but has inaccurate and misleading statements and references.

Carl Byoir & Assocs. also worked for the Hitler government via the German Tourist Board.

Revelation of these contracts caused outrage in Congress and resulted in passage of the Foreign Agents Registration Act in 1938. It was further strengthened in 2008.

"Howling with the Wolves," a 224-page master's thesis by Tyrone Steven Bomba, documented Lees admiration of Hitler and Mussolini. Lee liked big men. The book is available at the Pollak library at California State University, Fullerton. WPs entry on FARA is far too brief.

Neither Lee nor Bernays deserve to be called fathers of PR. Bernays made too many statements about PR being a way to propagandize the herdlike public. His books, including "Propaganda," were favorites of Nazi propaganda czar Joseph Goebbels.

The History of PR refers to the ethical Code of PRSA but not to the fact that for its first nearly 30 years the Code interfered with price competition by barring contingency fees and open competition for accounts. This resulted in the Society being forced to sign and publicize nationally FTC consent decree Docket C-2907, 90 FTC 324 in 1977.

The History says that in 1982 effective PR helped save Johnson & Johnson after the highly publicized Tylenol poisoning crisis. There is a link to the Chicago Tylenol murders that gives a narrative that has been challenged by former J&J employee Scott Bartz who provided copious evidence that the poisonings took place in the five-part distribution chain for Extra Strength Tylenols and not at the store level.

Bartz, who was with J&J 7.5 years, put his research into The Tylenol Mafia, a 619-page book that was published this year.

The Byzantine distributional process was never written about by any media in 1982, says Bartz, partly because J&J avoided a press conference where it might have been revealed. J&J, as part of its stance that it had nothing to do with the poisonings, offered a measly $100,000 for information on someone who killed seven people.

The J&J pill, swallowed whole by WP as well as the New York Times, Economist, Fortune, Christian Science Monitor and others, is that J&J acted quickly and responsibly. J&Js behavior has long been hailed as PRs No. 1 crisis success story.

Had the NYT or other national media reviewed the Bartz book, it would have been picked up by WP which demands publication in reliable media before it will reference anything.

Bartz, however, has only been able to win notice in Chicago papers including The Chicago Reader and on local affiliates of TV networks including Fox. The national networks have turned him down. His calls and e-mails to NYT are ignored.

The Bartz book at the very least deserves mention by WP.

This writer attempted to post five articles on WP over the holiday and all five were rejected for one reason or another.

WP is so hooked on demanding input from reliable media before it will touch anything that if it were a firehouse its firefighters would refuse to respond to an alarm if only one person phoned it in. It would wait for a consensus to build among the neighbors. It might even wait for a story in the local paper.

A problem for PR is that WPs sketchy entries on PR, the history of PR, PRSA and Accreditation in PR http://en.wikipedia.org/wiki/Accreditation_in_public_relations are deficient by its own standards.

The entry on PR is said to read like an advertisement and WP says, Please help to improve it.

The PRSA entry is a microscopic 398 words that talk about its membership total, website, awards program and that it works in tandem with the Student Society.

In rejecting our articles, including one about the National Press Clubs condemnation of PRSAs press boycott, WP accused us of copyright violation because what we submitted had been published on odwyerpr.com. WP editors do not understand copyright. Writers do not give up copyright because their words are published somewhere. They maintain the right to publish their words anywhere.

WP has no entry at all on the Council of PR Firms whose 101 members include almost all of the conglomerate-owned PR firms as well as major other firms such as Waggener Edstrom and APCO. Total revenues are at least $3 billion.

CPRF was founded in 1998 with the intention of taking over the ranking of PR firms that were being done by the ODwyer Co., PR Week/U.S., and The Holmes Report. CPRF sent forms to 5,000 PR firms and told its member firms not to provide any figures to the three trade publications. CPRF president Jack Bergen said PR firms make money in ways that ODwyer doesnt recognize. He should not be the one to define our business and we shouldnt be beholden to him.

The ODwyer Co. objected to a trade organization performing a journalistic role and to CPRFs ranking rules that allowed paid ads to be counted. CPRF did not ask for top pages of income tax returns or W-3s but relied on statements by CEOs and CFOs.

Conglomerate-owned firms, which contributed more than half the dues of CPRF, pulled out of all the rankings in 2001, citing penalties of Sarbanes-Oxley for issuing false financials. The conglomerates said differing accounting rules in dozens of countries made it impossible to enforce uniform reporting of finances. CPRF then stopped ranking any firms.


No Mention of (PR) Seminar

WP has no mention of (PR) Seminar, the annual gathering of blue chip corporate PR heads and CEOs of major PR firms.

Although executives and editors of more than 20 major media have attended Seminar, none has ever mentioned its existence.

However, our office has 40 years of the attendance lists and programs of Seminar which is proof enough of its existence. We also have a boxful of articles illegally copied and sold by the PR Society, a practice that went on from the late 1970s to 1994 when our expose halted it, and the $150,000 PRS and Rockefeller Foundation 1999 study that found PR specialist ranked 43rd on a list of 45 believable spokespeople.

We hope some local Wikipedians will visit our office to see this and much more documentation. The New York WP group has monthly events and will celebrate Wikipedia Day Saturday, Jan. 28 at NYUs Tisch School of the Arts. Participation is free and includes pizza and cake. Sixty went to last years celebration.

A committee of PR pros and journalists is needed to correct and expand all the WP entries that refer to PR. The many people who are going to those entries are coming away either empty-handed or misled.

WP is not living up to its goal of being encyclopedic. That word means full, complete, exhaustive, all-embracing, vast, thorough and wide-ranging. It should see itself as a firehouse ready to jump on major new facts and research such as The Tylenol Mafia. New evidence can topple cherished notions and beliefs.