Former Boston Red Sox PR pro Doug Bailey has penned a 4,400-word tell-all piece for Boston Magazine, an inside account that will no doubt roil his former clients and agency colleagues. But the piece is a valuable behind-the-scenes look at sports PR, in addition to a treasure trove for Sox fanatics. 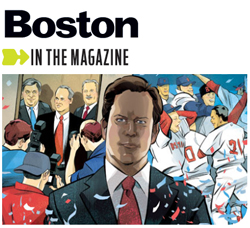 Bailey handled the Red Sox account as a senior VP for Boston firm Rasky Baerlein from 2001-07, starting with counsel to the ownership group that bought the team and later including the Sox's two recent championships but before its epic collapse in 2011.

Bailey, who now runs his own PR shop in Newton, Mass., says it was his idea to give out bags of infield dirt to fans as the new ownership group did a New England tour to drum up interest, a runaway PR success.

The bags disappeared the instant they were shown off to the admiring crowd. On our next trip we packed even more bags, but ran out just as fast. The enthusiasm and rabid intensity of fans throughout New England defied logic and clearly awed the new owners, who were realizing first-hand what everyone in the league had told  or warned  them: Its different in Boston.

 When GM Theo Epstein quit suddenly in 2005, one of the conditions of his return was that owner Larry Lucchino nix his daily "media meetings" reviewing news coverage and planning PR strategies.

 A PR mistake might have helped to undercut the team's bid to get significant public funding to improve Fenway and the surrounding area.

Read the whole piece at bostonmagazine.com.