Public Relations Society of America in November launched a quixotic quest, a search for the definition of PR. This blogger isnt going to offer his own formal definition of a business that is as fast-changing as PR. That would be presumptuous. Rather, I will follow the lead of U.S. Justice Potter Stewart, who in describing the threshold test for pornography famously said: I know it when I see it. 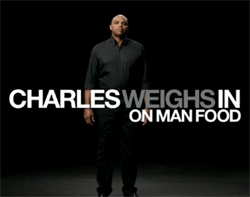 PR is what Ketchum is doing for Weight Watchers, which has embarked on its own quixotic quest: getting guys to sign up for the weight-loss program.

In a masterful stroke, now-relatively svelte Barkley hosted Saturday Night Live on Jan. 7, where he gave multiple plugs to Weight Watchers. He told the audience how many pounds that he lost and reminded them that he is remembered as the round mound of rebounds.

It was PR gold.

Barkley fronts Weight Watchers Lose like a man ad campaign, which aims to fatten the bottom line while tackling a real health issue. Though the Centers for Disease Control and Prevention says more men are obese or overweight than women by a 72.3 percent to 64.1 percent, guys would rather stick hot needles into their eyes than stick to Weight Watchers food intake guidelines and attend weigh-ins, where attendance skews 90 percent women. Thats why a glib tough-guy like Sir Charles is the perfect pitch man for Weight Watchers.

The Weight Watchers PR caravan rolls on today as CEO David Kirchhoff, who took the helm in 2007, is the focus of the boss talk column in the Wall Street Journal. He told the WSJ that the company launched a Weight Watchers for Men line several years ago, but didnt put much promotion behind it.

Now with Charles in Charge, WW has a role model whos about as manly as anybody can possibly get, whos actually eating fruits and vegetables for the first time in his lifeit signals to men everywhere that this is OK to do, said Kirchhoff, who lost 30 pounds since going on Weight Watchers a decade ago. Yes, Kirchoff attends Weight Watchers meetings. [Kirchoff is a former director of corporate strategy at PepsiCo, which is a primary target of anti-obesity advocates.]

McCann-Erickson developed the Lose like a man ad campaign in which Barkley tells how he can continue to chow down man food while following to the Weight Watchers program.

Ketchum, which handles Weight Watchers executive visibility, media relations and spokesperson appearances for Barkley and Jennifer Hudson, gets kudos for the best PR campaign of this very young year.

A shout-out goes to Lauren Mundell, senior VP and Ketchum lead on the account.