A $5M donation by casino magnate Sheldon Adelstein to the pro-Gingrich Winning Our Future super PAC guarantees the show will go on in South Carolina. WOF is buying wall-to-wall "Romney-the-job killer" advertising in the Palmetto State, the next GOP primary state. 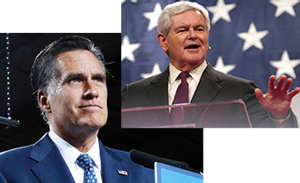 Republicans are wrong to criticize the former Speaker. His kamikaze attacks are the best thing to happen to Romney. The private equity line was to be the club wielded by president Obama against Romney in the general election. With the economy on the mend, Obama had the opportunity to position as a job creator compared to his job destroying competitor.

Thanks to Newt, private equity will be old news by the time Obama and Romney go head-to-head in debate. By then, Newt will have successfully inoculated Romney against a presidential PE onslaught. A cabinet post could be Newts reward.

In the bum timing department, Carlyle Group, the cream of the PE crop, disclosed on the day of the New Hampshire primary that founders David Rubinstein, William Conway and Dan AAniello combined for a cool $400M in earnings last year. The Wall Street Journal noted that the huge payday likely will increase scrutiny of an industry braced for a backlash amid the presidential campaign of former Gov. Mitt Romney, who founded another private-equity giant, Bain Capital.

Romney has only himself to blame for the PE attack. Hes the one who declared to be a job creator at Bain. The entire focus of PE is to make money for themselves and investors. Jobs are a by-product.


There is a lot of misinformation being spread, purely for political purposes and on both sides of the aisle, as it pertains to private equity. Whats been lost is an understanding of the critical role that private equity investment plays in growing the U.S. economy and delivering more than a trillion dollars in investment returns to pension funds, endowments and charitable foundations.

"In 2010 alone, private equity invested nearly $150 billion in U.S. companies. As a result, many businesses grow and are strengthened and often jobs are created over the long term.