Defense Secretary Leon Panetta's exposure to PR is paying off. The former member of Fleishman-Hillards international advisory board scored major PR points today with his quick response to the video that shows four alleged Marines urinating on the bodies of dead Taliban fighters in Afghanistan. 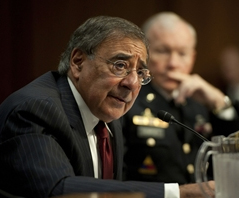 The former Congressman and CIA Director called the video utterly deplorable and condemned it in the strongest possible terms. This conduct is entirely inappropriate for members of the United States military and does not reflect the standards or values our armed forces are sworn to uphold. Those found to have engaged in such conduct will be held accountable to the fullest extent, said Panetta.

The Pentagon, in fact, launched an all-out damage control effort. Secretary of the Navy Ray Mabus called the conduct shown in the video appalling and outrageously offensive. We hold the U.S. Marine Corps to the highest possible standards, and the behavior shown in the video failed to uphold those standards in every possible way. Anyone who is found responsible for these actions will be held appropriately and fully accountable.

Gen. James Amos, commandant of the Marine Corps, added: I want to be clear and unambiguous; the behavior depicted in the video is wholly inconsistent with the high standards of conduct and warrior ethos that we have demonstrated throughout our history.

If legitimate, the video could draw unwanted parallels to the Abu Ghraib prison abuse, further damage Americas reputation in the Muslim world and serve as a recruiting tool for Al Qaeda. A more immediate concern: it could torpedo negotiations with the Taliban to bring about a settlement of the drawn-out mess in Afghanistan.

Panetta got off to a quick start. A thorough investigation is a must because actions speak louder than even the best PR words.

The world is watching.