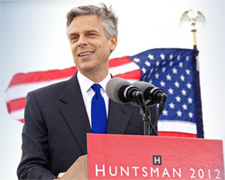 Had he exited endorsing neither Romney nor the other conservative contenders, Huntsman would have stood tall. He's now diminished.

After all, the ex-Massachusetts Governor is the guy that Huntsman called a perfectly lubricated weathervane on the important issues of the day and unelectable.

Thats the politician that Huntsman is now backing in the Jan. 21 South Carolina primary?

South Carolinas biggest newspaper, The State, endorsed Huntsman on Jan. 15 for essential values that drive his candidacy: honor and old-fashioned decency and pragmatism. The paper called Huntsman someone who has a well-defined set of core values but is not so rigid that he ignores new information and new conditions and someone who has shown himself to be honest and trustworthy.

In backing Romney, Huntsman comes across just as another politico. The endorsement may be the price for a cabinet post in the Romney administration. I thought Huntsman was a lot better than that.

In his official statement suspending the campaign, Huntsman said:


I will never stop fighting for America, and I will continue to put her welfare first, ahead of any partisan or special interest.

I am unshaken in my belief that with the right leadership, we can move forward together, and ensure that Americas light shines bright for generations and generations to come.

Are those just empty words?